The angst of the hapless farmer ultimately singed the ruling BJP’s throne in these states, mainly in Madhya Pradesh and Chhattisgarh. 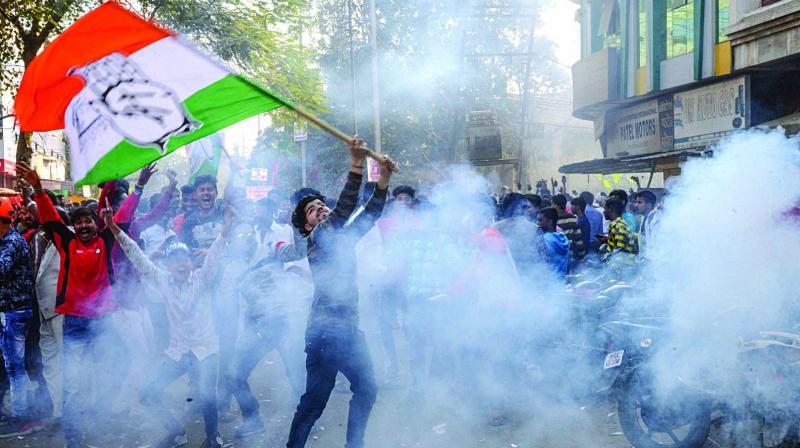 A Congress worker waves the party flag to celebrate the party’s performance in Assembly elections in Rajasthan, Chhattisgarh and Madhya Pradesh, in Jabalpur on Tuesday. (Photo: PTI)

New Delhi: The agrarian crisis prevailing across the country which forced lakhs of farmers to leave their fields in the middle of the sowing season to lead a protest march to the national capital a few days back, seeking better price for their yields, proved to be BJP’s main nemesis leading to its defeat in assembly elections in all the three key Hindi speaking states of Madhya Pradesh, Chhattisgarh and Rajasthan.

The angst of the hapless farmer ultimately singed the ruling BJP’s throne in these states, mainly in Madhya Pradesh and Chhattisgarh.

The interesting fact to see here is that seeds of this agrarian crisis were sown by the hasty decision of demonetisation by the BJP-led NDA government at the Centre on November 8, 2016.

It not only damaged the informal sector, but also ruined the rural economy which mainly runs on cash. Owing to a major part of the currency becoming defunct overnight, farmers did not get the right price for their produce.

The climax was reached when on June 6, 2017, six farmers lost their lives in police firing in Madhya Pradesh’s Mandsaur district while protesting for a better price for their crops.

The agrarian crisis has been boiling over in all these states, and this was quickly realised by the Congress, which promised a farm loan waiver of up to Rs 2 lakh for farmers in Madhya Pradesh in its manifesto and also promised a social security pension to them as well as a rebate in the registration fee of land documents, besides a financial help of Rs. 51,000 for the marriage of daughters of small cultivators.

In Chhattisgarh farmers delayed selling their paddy yields in the mandis and chose to wait till the elections got over, after Congress chief Rahul Gandhi had announced that his party will waive off farm loans and offer Rs 2,500 as minimum support price for paddy. Also Congress leaders claimed that under the BJP rule in Chhattisgarh, farmers’ suicides have only gone up.

Between 2014 and 2016 around 2,400 farmers had committed suicide in Chhattisgarh, Congress leaders had said citing official figures.