Jignesh Mewani popular, but outsider tag may harm him

Mevani is being seen as an outsider, since he is from Mehsana and his movement was largely based out of Saurashtra. 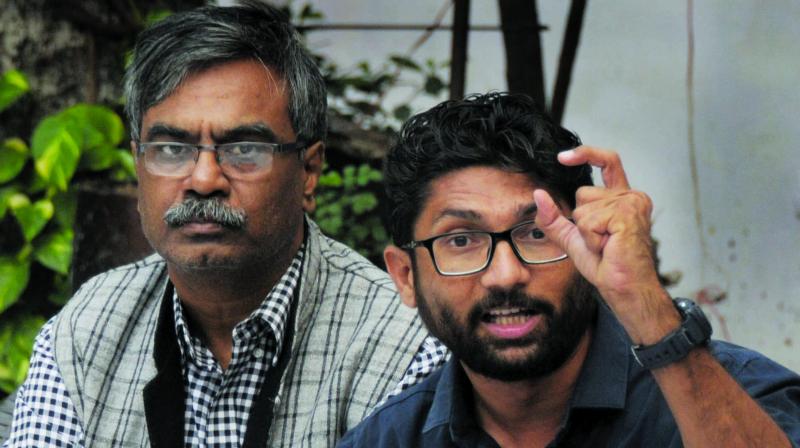 Vadgam (Gujarat): Men rush in and out of two small rooms in a double-storeyed hotel off the Palanpur-Mehsana highway. The floor is littered with campaign material — festoons, banners, posters — all bearing Jignesh Mewani’s bearded and smiling face, eyes behind thick-rimmed glasses.

The dalit lawyer-activist, along with Patidar quota leader Hardik Patel and OBC leader Alpesh Thakore, has emerged as the face of resistance against the BJP, which has ruled Gujarat for the last 20 years.

Late in November, he announced he was standing for election as an independent candidate from the Vadgam constituency of north Gujarat’s Banaskantha district, prompting the Congress to swiftly withdraw its candidate from the seat, a traditional stronghold of the party.

The highway-side dhaba-cum-hotel is Mevani’s election headquarters where an assortment of young activists from in and around Gujarat and from faraway Jawaharlal Nehru University brainstorm to make the 35-year-old’s maiden foray into electoral politics a success.

With around one lakh Muslims and dalit voters in the 2.5 lakh-strong constituency, Mevani, who emerged as a Dalit spearhead after organising movements against atrocities against the community in Una, was largely expected to sail through.

But with a combination of local issues, Mr Mevani’s prospects suddenly appear a little bleak, says a local Congress supporter.

Three factors have been working against him. Mevani is being seen as an outsider, since he is from Mehsana and his movement was largely based out of Saurashtra. A rebel Congress candidate is also in the fray. And there is a possible consolidation of Hindu votes cutting across castes. “Had the Congress fielded its own candidate, a victory was certain. But this time, there will be a contest,” Abdul Haq, the supporter, says.