Out of the 56 Assembly seats that had bypolls, the Congress could manage to win only 12 seats 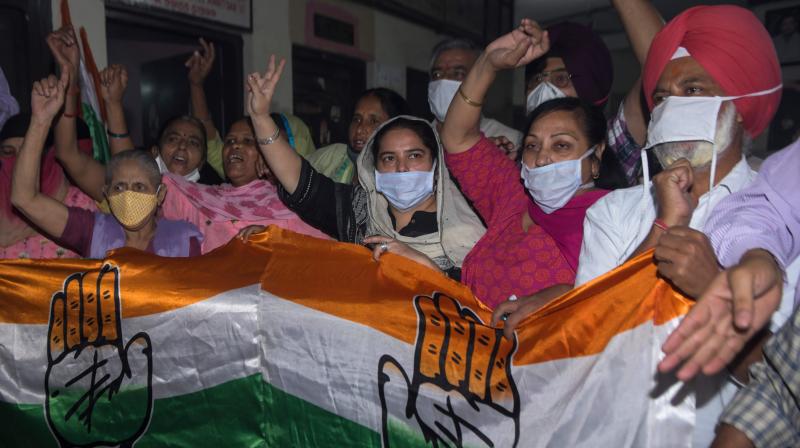 New Delhi: The decimation of the Congress in Bihar and bypolls in 11 states has raised questions on the recently-appointed AICC team of state in-charges and general secretaries. Out of the 56 Assembly seats that had bypolls, the Congress could manage to win only 12 seats, a strike rate of 20 per cent.

Under Rajeev Satav, the Gujarat in-charge, Congress lost all the eight Assembly seats. Interestingly, Mr Satav was also given a Rajya Sabha nomination earlier this year. With Randeep Surjewala in-charge of Karnataka, the party lost both the Assembly seats in the state. Apart from his assigned state, Mr Surjewala was also deeply involved in Bihar where the Congress just about managed to win 19 out of the 70 seats it had contested. Similar was the case in Telangana and Odisha where the party lost one and two seats respectively. The in-charge of these states are Manickam Tagore and A Chella Kumar respectively. All these appointments were made recently, in September this year.

In Haryana, the Congress won the lone seat but that was under the steam of former chief minister Bhupinder Singh Hooda. The state in-charge, Vivek Bansal, was nowhere in the picture.

In Jharkhand and Chattisgarh, the Congress won one seat each primarily because the Congress is in power in the state and the state chief ministers put their weight behind the party candidates. Bhakta Charan Das and Kuljeet Nagra, recently appointed to oversee the states of Manipur and Nagaland, could not help the party to even open its score in these states.

Even after the high-octane campaign against the BJP’s Yogi Adityanath government in Uttar Pradesh over the issues of migrant labourer crisis and the Hathras rape case, the party drew a blank across seven seats. In the Deoria Assembly segment, which is in the home district of state Congress chief Ajay Kumar ‘Lallu’, the Congress candidate got a little over 3,00 votes and a vote-share of just 2.17 per cent.

Insiders claim that since these appointments took place after the Congress Working Committee (CWC) meeting in which the letter written by the 23 party leaders was discussed, the appointments have the imprint of Rahul Gandhi. They further add that resentment is brewing against these leaders because the party has not been able to make any impact in these states.

Mr Satav and Mr Chella Kumar, in-charge of Gujarat and Odisha, have often attacked senior and junior leaders of the party who have commented on the functioning of the office of Mr Gandhi or the party. Their position becomes questionable now as the results show that the party in their states has been decimated at the hustings.

Several leaders claim that instead of hitting the ground the party was more interested in conducting press conferences by “para-dropped” leaders, as it happened in Bihar.

The kitchen politics within the party has ensured its defeat in the recent polls. Sources say that after the Congress’ abysmal performance, once again questions will be raised on the functioning of the party and that it can happen as early as next week.