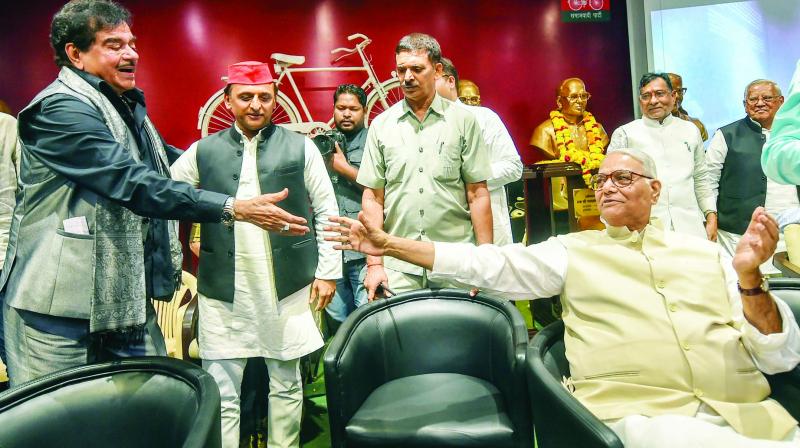 Lucknow: Former Bharatiya Janata Party (BJP) leader Yashwant Sinha said on Thursday that, if all parties came together the defeat of 1977, when the opposition jointly defeated the all powerful Indira Gandhi government, could be repeated.

Speaking at a function held at the Samajwadi Party (SP) office to mark the birth anniversary of socialist leader Jai Prakash Narain, Mr Sinha said that the situation in the country was similar to those of the emergency days.

“Policies are designed to crush the people and the media has been gagged. Those who do not toe the government’s line are subjected to raids by various agencies. If we all join hands, we can repeat 1977,” he said.

Mr Sinha said that the situation in the Modi government was indeed a matter of concern. “The defence minister does not know about the Rafael deal, the finance minister did not know about demonetization and the role of external affairs minister is restricted to Twitter,” he said.

Mr Sinha further said that, he had worked with Jai Prakash Narain, Chandra Shekhar and Mulayam Singh Yadav. “Time has come to fight against the modern day Duryodhan and Dushasan,” he pointed out. He was accompanied by BJP MP Shatrughan Sinha, who said that he had joined politics after being impressed by Jai Prakash Narain.

Mr Shatrughan Sinha termed SP president Akhilesh Yadav as a ‘rising star’ of Indian politics and one of the most able and stable leaders in the country.

Mr Yeshwant Sinha and Mr Shatrughan Sinha have been coordinating with opposition parties in recent months to build up a strong political alternative.

The two leaders have attended meetings with Aam Aadmi Party, RJD and now SP. Interestingly Mulayam Singh Yadav did not attend the function at the SP headquarters on Thursday.