‘Pledge to rein in corruption, fight for rights of Muslim sisters’: Modi

Talking about development for tribal, he said ‘We are setting up 462 Eklavya model residential schools across the country.’ 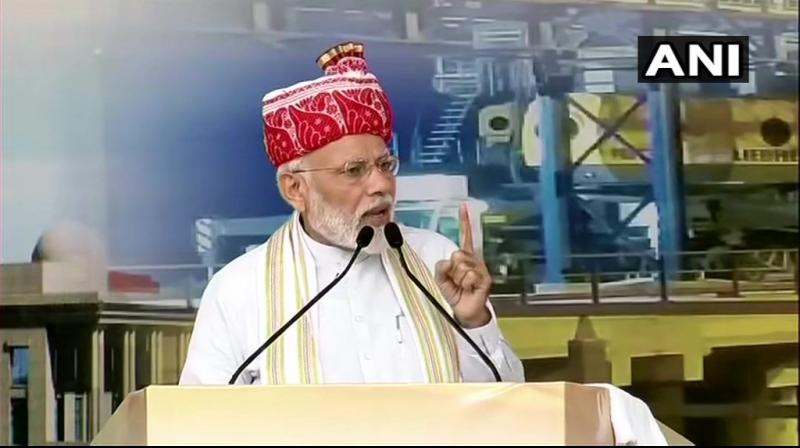 ‘Ayushman Bharat, the world's largest health assurance scheme, was launched in Jharkhand. Today, pension schemes for traders and farmers were also launched from this land of Birsa Munda. Jharkhand is the launching pad of big schemes beneficial for the poor and the tribals,’ he added. (Photo: ANI)

Ranchi: Prime Minister Narendra Modi addressed a rally in Jharkhand's Ranchi after inaugurating a series of welfare schemes and some of the major developmental projects in the state. He inaugurated a newly constructed building of Jharkhand Assembly at Kute gram in Ranchi. The PM inaugurated the building in the presence of Governor Droupadi Murmu and Chief Minister Raghubar Das. It is the dubbed as the first paperless Assembly in the country.

He inaugurated a multi-modal cargo terminal. The cargo terminal, which was inaugurated online by the prime minister from here, has been built by Inland Waterways Authority of India on River Ganga at Sahibganj.

He said, “This water terminal in Jharkhand will not only connect the area to the rest of India but also to other countries. After this terminal the tribal brothers and sisters and farmers will be able to send their products to markets in the whole country easily.”

Prime Minister Narendra Modi on Thursday launched an ambitious pension scheme for farmers from here. Under the 'Pradhan Mantri Kisan Mandhan Yojana', farmers between 18 and 40 years of age will get Rs 3,000 monthly pension after reaching 60.

“Our pledge is to rein in corruption, fight for rights of Muslim sisters, root out terrorism,” PM Modi said.

Talking about the development in the tribal areas, he said “Today for the development and education of tribal children and youth we are starting a very big project. We are setting up 462 Eklavya model residential schools across the country.”

Those who thought they are above law are now approaching courts for bail, he said. Talking about the two newly formed Union Territories, Modi said, "We aim to bring about development in J&K and Ladakh, the work for which has begun in the first 100 days of NDA 2.0."

"Ayushman Bharat, the world's largest health assurance scheme, was launched in Jharkhand. Today, pension schemes for traders and farmers were also launched from this land of Birsa Munda. Jharkhand is the launching pad of big schemes beneficial for the poor and the tribal community," he added.