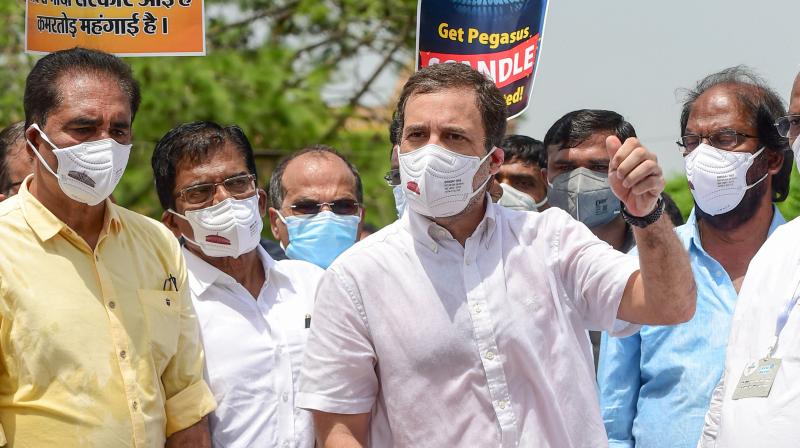 Congress leader Rahul Gandhi along with other opposition parties' leaders talks to the media at a protest march against the curtailment of the Monsoon Session of Parliament, in New Delhi, Thursday, Aug 12, 2021. (PTI/Kamal Kishore)

New Delhi: Opposition leaders on Thursday took out a protest march against the government on several issues, including Pegasus and alleged manhandling of their MPs in Rajya Sabha. Speaking with reporters at Vijay Chowk, Congress leader Rahul Gandhi said that the voice of people was "crushed" in the House, and added that the voice of 60 per cent of Indians was silenced as the Opposition was not allowed to speak and termed it as a murder of democracy.

“As far as 60 per cent of the country is concerned, there has been no Parliament session. The voice of 60 per cent of this country has been crushed, humiliated and yesterday in the Rajya Sabha, physically beaten. This is murder of democracy.” He also added that this is the first time that MPs were beaten up in the House and outsiders were dressed as marshals. “We wanted the government to debate Pegasus but the government refused. So we are raising all the issues outside,” he added.

Top leaders of several Opposition parties met in the chamber of Leader of Opposition in the Rajya Sabha Mallikarjun Kharge and then walked in protest from Parliament House to Vijay Chowk. Those who attended the meeting included Rahul Gandhi, Sharad Pawar, Sanjay Raut and Manoj Jha.

The protest comes a day after the passage of bills in Rajya Sabha amid charges of manhandling of Opposition leaders.

The protesting MPs carried placards and banners against the government that read, "Stop murder of democracy" and "We demand repeal of anti-farmers laws". Sanjay Raut, Shiv Sena MP in Rajya Sabha, said that the Opposition didn't get a chance to present their views in Parliament. "Yesterday's incident against women MPs was against democracy. It felt like we were standing at the Pakistan border," he said.

The Opposition leaders met Rajya Sabha chairman M Venkaiah Naidu to apprise him of the happenings in the house on Wednesday. Mr Sharad Pawar was also part of the Opposition delegation.

The joint statement issued by the Opposition said, “Without any provocation... outsiders, who were not part of Parliament security, were brought in to manhandle Opposition leaders and members, including women MPs who were only protesting the government's conduct, highhandedness and muzzling of their voice." The statement slammed the government for its "authoritarian attitude and undemocratic actions", and accused it of "deliberately derailing" the monsoon session despite the Opposition having "unanimously conveyed (the need) to discuss important national issues".

On Wednesday there were unruly scenes in the Rajya Sabha, as the government passed an amendment relating to insurance bill. Several women MPs alleged they were physically bullied by male marshals as they were protesting in the Well of the House.