India   Politics  12 Aug 2020  There should be no space for personal ill-feelings: Sachin Pilot
India, Politics

Before taking off for Jaisalmer, Gehlot said, How can I forget MLAs who stayed with me through this time? They will always be in my heart 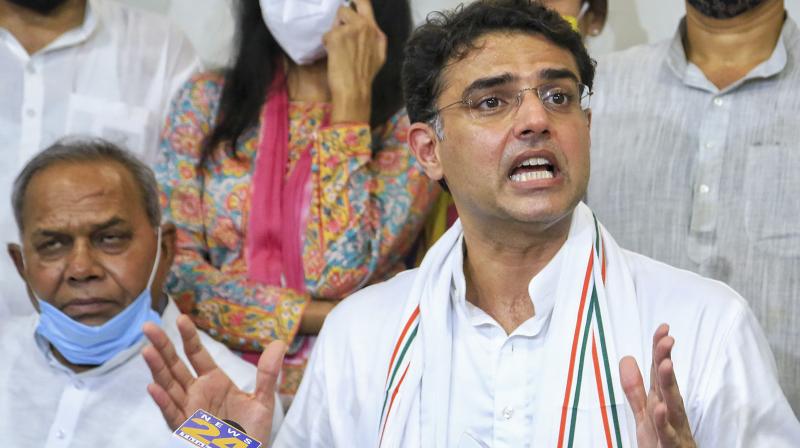 Congress leader Sachin Pilot along with party MLAs addresses a presser at his residence in Jaipur. — PTI photo

A day after truce was declared between Rajasthan’s former deputy chief minister Sachin Pilot and the Congress, Mr Pilot said on Tuesday that he has never hankered after any post and hoped that raising his voice for “truth and principles that are important in my scheme of things” will not lead to “vendetta politics”.

Mr Pilot, whose fraught relationship with chief minister Ashok Gehlot led to an existential crisis within the Congress while threatening the survival of the Rajasthan government, also said that he was shocked at the statements made against him.

"I am sad, shocked and hurt due to the kind of words used against me," Mr Pilot said and added that there should not be any space for “personal ill-feelings”.

While Mr Pilot reached Jaipur, chief minister Ashok Gehlot left for Jaisalmer where his 100-odd MLAs are staying. Insiders say that some of the MLAs are not happy with the truce. A meeting of these MLAs with Mr Gehlot, , who had recently called Mr Pilot "nikamma", is expected to cool down the tempers.

Several MLAs have demanded that the 18 MLAs who had gone with Mr Pilot should not be accommodated in the government. The basic charge of the MLAs in Jaisalmer is that no “ghar wapasi” can take place without “prayashchit ” (penance).

Before taking off for Jaisalmer, Mr Gehlot said, "How can I forget MLAs who stayed with me through this time? They will always be in my heart.”

The MLAs are feeling "let down and disillusioned", say sources, and senior Congress leaders have been trying to calm them down. Mr Gehlot has decided to stay overnight in Jaisalmer.

The special session of the Rajasthan Assembly is slated to be held later this week. Insiders claim the 19 rebel MLAs, including Mr Pilot, will be present with the government. The Assembly session will bring closure to the month-long political uncertainty in the state.