India, China ties should be factor of stability in uncertain world: Jaishankar

His visit was finalised much before India's move to revoke Article 370 of the Constitution that gave special status to Jammu and Kashmir. 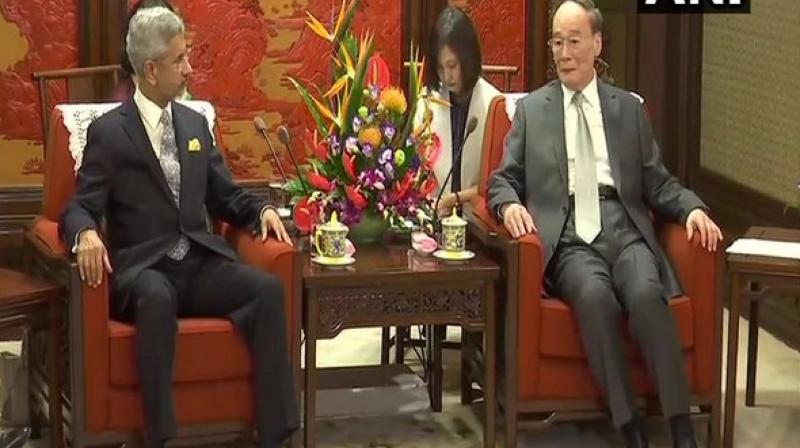 Beijing: External Affairs Minister S Jaishankar, who is on a crucial three-day visit to China, on Monday said that India-China relations should be a factor of stability at a time when the world is facing an uncertain situation.

Jaishankar, who arrived here on Sunday, called on Chinese Vice President Wang Qishan at the Zhongnanhai, the picturesque imperial residential complex where top Chinese leaders reside. He later had a restricted meeting with Foreign Minster Wang Yi followed by a delegation level meeting.

In his opening remarks during the meeting with Wang, considered a confidant of President Xi Jinping, Jaishankar said, “We reached a consensus in Astana two years ago that at a time when the world is more uncertain, our relationship should be a factor of stability.”

“And I am very pleased today to come in the aftermath of the Wuhan summit where the consensus between our leaders on global and regional issues has expanded,” he said Monday, referring to the summit meeting between Prime Minister Narendra Modi and Chinese President Xi.

During his three-day visit, Jaishankar will hold talks with the Chinese leadership on a host of issues including finalisation of arrangements for President Xi's visit to India later this year for the second informal summit with Prime Minister Modi.

The visit of Jaishankar, the first Indian minister to tour China after the Modi government began its second term, is also taking place in the aftermath of India's decision to revoke special status to Jammu and Kashmir and its division into two Union Territories -Jammu and Kashmir, and Ladakh.

His visit was finalised much before India's move to revoke Article 370 of the Constitution that gave special status to Jammu and Kashmir.

Jaishankar, who was the first career diplomat to become the External Affairs Minister, served as India's Ambassador to China from 2009 to 2013, the longest tenure by an Indian envoy.