Rahul arrived at the Court to appear in connection with the case. 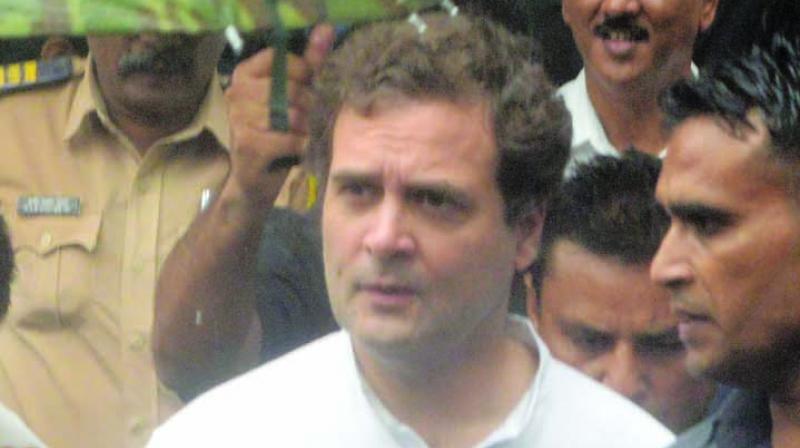 Rahul also visited Swathi restaurant in Ahmedabad where he was seen interacting with people and clicking selfies with them. (Photo: Rajesh Jadhav)

Ahmedabad: The Metropolitan Court here on Friday granted bail to Congress president Rahul Gandhi in connection with a criminal defamation suit filed against him by Ahmedabad District Cooperative Bank and its chairman Ajay Patel.

Rahul arrived at the Court to appear in connection with the case.

Earlier in the day, Congress leader had informed through a tweet that he would be appearing in another case filed against him by his "political opponents in the RSS and BJP."

"I am in Ahmedabad today, to appear in another case filed against me by my political opponents in the RSS/BJP. I thank them for providing me these platforms and opportunities to take my ideological battle against them to the public. Satyameva Jayate," he said in the tweet.

"Within a mere five days of the implementation of the demonetisation drive, old denominations worth Rs 3,118 crore were deposited in 11 district corporative banks that had links to the BJP leaders. The most noteworthy of them was Ahmedabad District Cooperative Bank, whose directors include BJP president Amit Shah," Surjewala had said.

He had further said that the bank, which is chaired by Ajay Patel, a close associate of Union Home Minister Amit Shah, received Rs 745.58 crore from November 10 to November 14.

Before appearing in connection with the criminal defamation suit, Rahul also visited Swathi restaurant in Ahmedabad where he was seen interacting with people and clicking selfies with them.