JD-U turns Lalu into graft's posterboy on his birthday 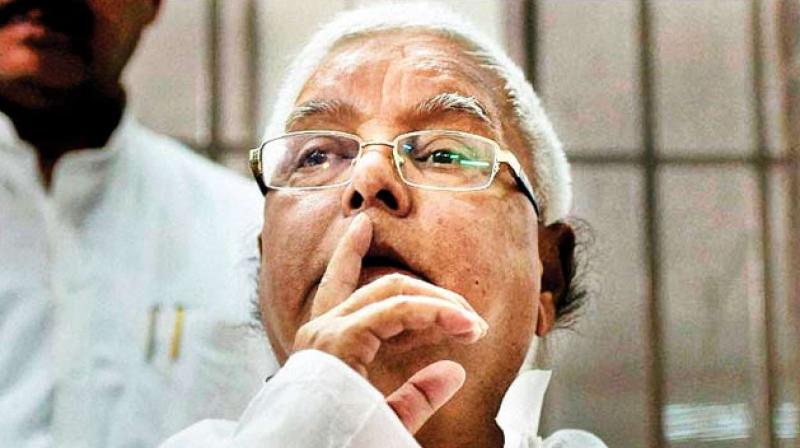 Patna: The ruling JD(U) is planning to use alleged corruption and misappropriation of properties by Rashtriya Janata Dal (RJD)chief Lalu Prarad Yadav and his family as the main poll plank during Assembly elections slated to be held later this year.

On Thursday, when the RJD was celebrating Lalu Yadav’s 73rd birthday, the JD(U) put up a poster in Patna accusing him of acquiring properties by bullying his party workers. The poster has a list of about 73 properties which have allegedly been acquired by the RJD chief and his family.

“Lalu Yadav used his political muscle to acquire properties through unfair means. In the coming days, you will see more such exposure. They (Lalu Yadav and his sons) keep talking about honesty but the reality is completely different,” JD(U) spokesperson and public relations minister (PRD) Neeraj Kumar told this newspaper.

Furnishing details of the land deals, he claimed that “in one of the documents Lalu Yadav has acquired land in the name of Tarun Yadav. The document mentions Tarun as his son, all of us know only about his two sons, Tej Pratap and Tejashwi Yadav, but today we want to ask where his third son is”.

The JD(U) recently said that the upcoming Assembly polls would be fought on the issue of Lalu-Rabri’s 15 years of “misrule” and “good governance” under the NDA led by chief minister Nitish Kumar in the successive years.

In November, the NDA will complete 15 years in power, which is equal to the period of Lalu and Rabri Devi’s regime in Bihar. In the 2015 Assembly polls, the RJD had emerged as the largest party with 80 seats.

The JD(U), then part of the grand alliance, had won 71 seats and the Congress won 27 seats. The BJP, which fought the elections alone after Nitish Kumar broke 17-year-old ties in 2013, had won 53 out of 157 seats it contested.

In 2017, the grand alliance government comprising JD(U)-RJD and Congress collapsed after the BJP’s Sushil Kumar Modi made similar allegations against Lalu Yadav and his sons.

Tejashwi Yadav, who was the deputy chief minister till July 2017, is currently the leader of Opposition in the state Assembly and has been declared the chief ministerial candidate of the grand alliance in Bihar.