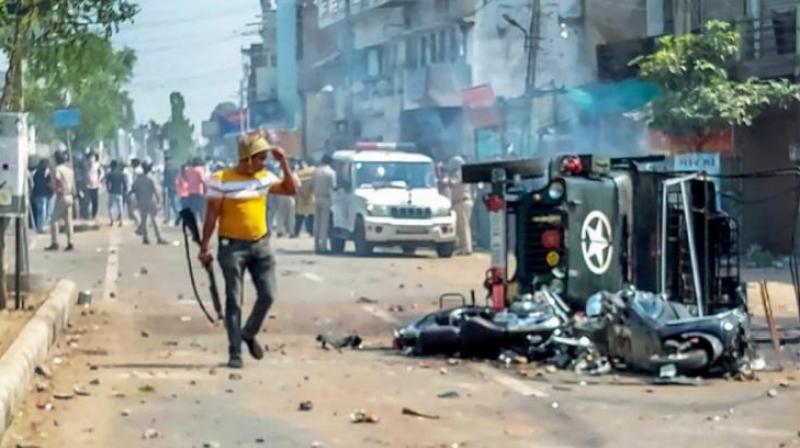 Several houses, religious places and shops were gutted in Khargone as the communal violence, after an attack on a Ram Navami procession, spread to different parts of the city by late Sunday night. (Representational Image/PTI)

Bhopal/Ahmedabad/Ranchi: Violence marred the Ram Navami celebrations in several parts of the country, with one person killed and 12 others injured at Lohardaga in Jharkhand, while curfew was clamped in Madhya Pradesh’s Khargone city and at least 84 people were arrested there, officials said Monday.

One person was also killed in Khambat town in Gujarat’s Anand district while there were some reports of violence in West Bengal’s Howrah district, adjoining Kolkata, after a Ram Navami procession.

Khargone’s superintendent of police Siddharth Choudhary got a bullet injury and at least 24 other people, including six policemen, were also injured in Sunday’s arson during the festival that marks the birthday of Lord Ram, they said.

Several houses, religious places and shops were gutted in Khargone as the communal violence, after an attack on a Ram Navami procession, spread to different parts of the city by late Sunday night. Curfew was clamped in three areas of the city, while prohibitory orders under Section 144 CrPC (banning the assembly of four or more people) were imposed in the rest of the district headquarters.

Maintaining a tough posture against the rioters, chief minister Shivraj Singh Chouhan ordered the bulldozing of illegally acquired properties of the accused in the incident. “We have identified 50 houses and shops built in encroached government land by some of the accused. All these properties will be demolished. Five houses have already been bulldozed”, a senior police officer said.

Earlier on Monday, Mr Chouhan said: “The rioters will not be spared. They will not only be sent to jails but also penalised for vandalising the government and private properties. A claims tribunal is going to be set up soon to penalise the accused”, he told reporters. School and college exams in the city were postponed, a notice issued by Khargone district administration said on Monday.

On Sunday night, the rioters also fought pitched battles at several places in the city. This was the second time the city has seen communal violence in a span of six months.

In Gujarat, meanwhile, the police arrested nine people for violence and stone-pelting during a Ram Navami procession at Khambat in Anand district, in which one person was killed on Sunday, while Section 144 CrPC was imposed in Himmatnagar town of Sabarkantha district after a similar incident there.

“The situation in Khambhat town is under control. We have already arrested nine suspects and started further investigations,” SP Ajit Rajian said. Police sources said those arrested include some local maulvis.

A similar stone-pelting incident was also reported during a Ram Navami procession in Sendhwa town of MP’s Barwani district where a police station in-charge and five others were injured. The situation was later brought under control, according to officials.

The Vishva Hindu Parishad (VHP) alleged that the minority community leaders and Left liberals are to be blamed for “attacks” across the country on people celebrating Ram Navami and cautioned them against leading their followers on the path of violence.

In a video message, VHP joint general secretary Surendra Jain termed the violence in Madhya Pradesh, Gujarat, Jharkhand and New Delhi’s Jawaharlal Nehru University as “unfortunate”, and said it is everybody’s responsibility to ensure such incidents do not happen.

In Lohardaga, one person died and 12 people suffered injuries after the clashes between members of two communities near Hirhi village Sunday evening after a group of miscreants pelted a Ram Navami procession with stones, district officials said. Internet services have been suspended in Lohardaga town and prohibitory orders under Section 144 CrPC imposed in the entire district, SDO Arbind Kumar Lal said.