Shah also questioned her silence on the killing of a first-time voter, Ananda Burman of the Rajbanshi community 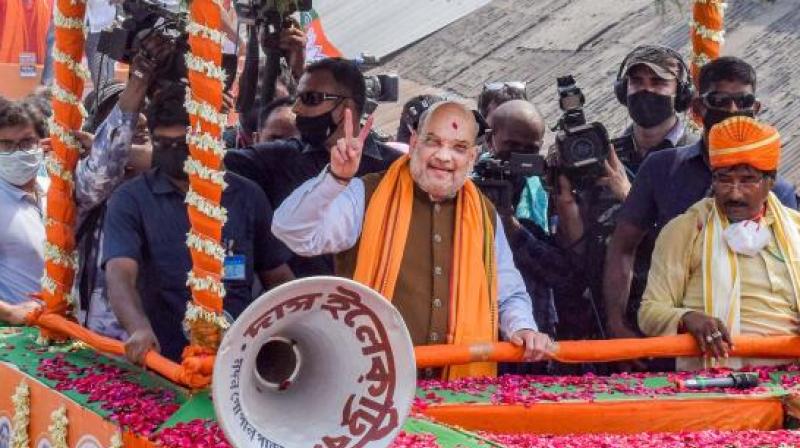 Union Home Minister Amit Shah during a roadshow in support of BJP candidates ahead of the 5th phase of West Bengal Assembly polls at Santipur in Nadia, Sunday, April 11,2021. (PTI)

Asking the Trinamul Congress supremo to apologise to the people for her instigation, he also questioned her silence on the killing of a first-time voter, Ananda Burman of the Rajbanshi community, after linking him to the saffron party.

Rejecting Ms Banerjee’s demand for his resignation over the firing, Mr Shah said: “Didi has been constantly claiming: Amit Shah must resign. Didi, I will resign when the people ask me to. But you should get ready since you will have to resign on May 2.”

Mr Shah said: “In the fourth phase of polls, a very sad incident took place. Some unidentified people attacked a polling booth and tried to snatch the weapons of the Central armed police forces (CAPF) personnel. When the CAPF jawans opened fire in self-defence and to protect their weapons, four people were killed. What is more sad is the way the entire incident is being politicised.” He was speaking to the media at Shantipur in Nadia district.

He added: “I saw Mamatadi’s statement. A few days ago, at the same Shitalkuchi seat, Mamatadi gave a brazen speech asking the people to gherao and attack the CAPF. I want to ask her: ‘Isn’t her speech responsible for the death of the four? Would the four have dared to attack the Central forces had she not made the speech?’ Provoking them, you made a cause for firing.”

Mr Shah later claimed at a BJP rally at Basirhat South in North 24 Parganas: “Didi, you, sitting in a wheelchair, left anyway but it was because of you that the four youths died.” He said: “I feel Mamatadi still has time to offer her respect to the fifth slain youth, talk about him and apologise to the people for her provocative speech.”

Complaining about Ms Banerjee’s sympathy only with the four victims, who were Muslims, the home minister said: “At the same booth, some goons of the TMC killed our worker in the morning so that polling could not take place. Later, the attack on the CISF followed. But Mamatadi mourned the loss of four lives only. She is not bothered by the death of Burman. This is a clear example to what level she brought down the politics of Bengal through her appeasement and vote bank politics even in death.”

He added: “We are equally saddened by the death of the four like that of Burman. The death of whosoever should be above politics. But she did not mourn the death of Burman, or shed tears… This type of politics is neither the culture nor the tradition of Bengal.”