The proposed board, Mr Tripathi said, will also be effective in curbing atrocities against traders. 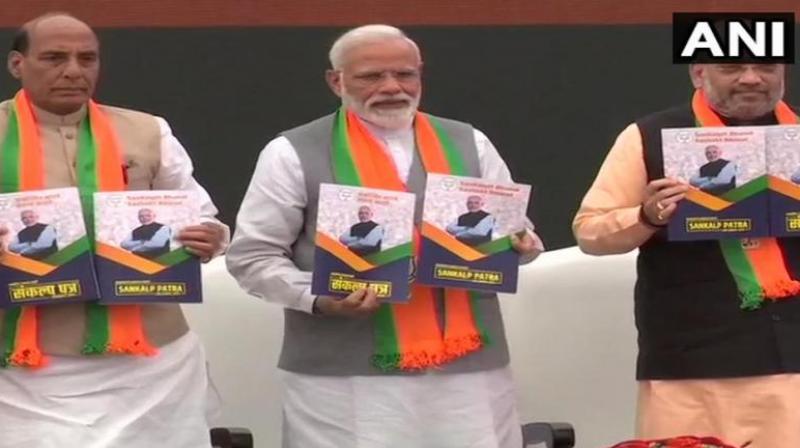 The BJP had said it will establish National Traders' Welfare Board and create a national policy for retail trade for the growth of retail business. (Photo: ANI | Twitter)

Lucknow: BJP's election promise to establish National Traders' Welfare Board if voted to power has evoked a positive response from the traders' community in Uttar Pradesh, while the Congress termed it as a "honey-trap".

Unveiling the manifesto -- Sankalp Patra -- for the general elections on April 8, the BJP had said it will establish National Traders' Welfare Board and create a national policy for retail trade for the growth of retail business.

Ashish Kumar Tripathi, secretary, Tax Lawyers Association, Lucknow, said it was a "good move" as traders had been demanding the formation of such a body for long.

"National Traders' Welfare Board will provide a platform to the traders to raise their grievances," he said.

The proposed board, Mr Tripathi said, will also be effective in curbing atrocities against traders.

However, Lalan Kumar, a member of the media management committee of the Uttar Pradesh Congress Committee, termed it as a "honey trap" for the traders.

"The traders were honey-trapped too during the implementation of the GST. The traders will suffer losses like under the GST. The people of the country are mature, and they will not accept any jumla (rhetoric) of the BJP," he said.

UP BJP media coordinator Rakesh Tripathi said the board will act as a bridge between the government and the traders.

"The board will be a forum where traders will discuss their issues. Till now, there was no such forum available to them," he said.

Samajwadi Party MLC and Spokesperson Rajpal Kahsyap said the BJP has been announcing "jumla after jumla" while the promises made during the 2014 election are yet to be fulfilled.

"What have they done in the last five years. People can no more digest these announcements," he said.

When contacted Mithilesh Gupta, president, Uttar Pradesh Dal Mill Association, said it was a "positive step" taken by the BJP.

"At least there is a party which thinks about us. We generate taxes for the government, and we feel that if the government cares for farmers, it should also do so for traders," he said.

GD Rupani, a Kanpur-based trader also described setting up of the board as a "good move" in the interest of the traders.

Om Prakash Mishra, a chartered accountant, said the body will act as a "channel" between the traders and the government. It will be instrumental in redressing the grievances of the traders, he added.