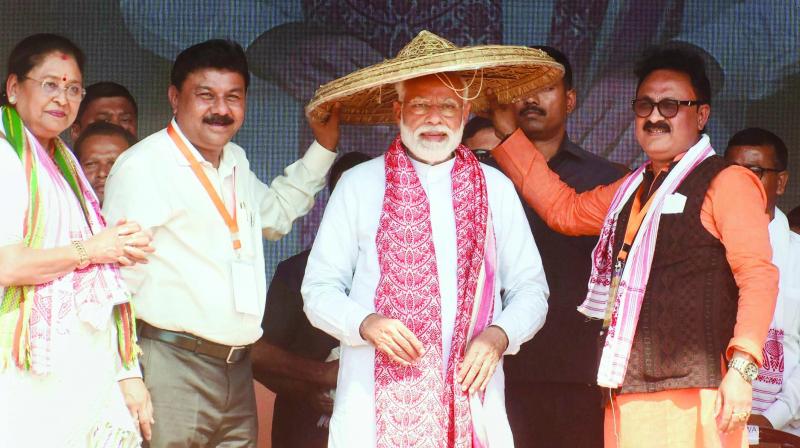 Claiming that crores of rupees which was meant for nutrition of children and expectant mother had been seized, Mr Modi said, “The naamdar parivar (famed family) is engaged in corruption and has made it a way of life for which its members are now on bail, but they call the chowkidar a chor.

Launching a frontal attack on Congress, the Prime Minister said, “There is a Tughlaq Road in Delhi and there is a bungalow where a big leader lives. During the last few days, a game involving several crores of rupees is being played. Sack-loads of currency notes are being recovered from those people who are connected with this bungalow.”

Accusing the Congress of looting money meant for the welfare of women and children, Mr Modi said, “It is a sin to vote for such people.” He also said Congress compromised with the nation’s security by demanding proof of the attack on Pakistani terrorist camps.

Asserting that Congress, while indulging in vote-bank politics, ignored crucial issues afflicting the Northeastern states, Mr Modi said that there was ample opportunity for the Congress, after 1971 war, to settle the problems of Assam and Jammu and Kashmir but it kept the issues burning deliberately for its vested interests. “The Congress encouraged infiltration to ensure that its vote bank remained intact. But this chowkidar will ensure that infiltration is stopped to protect the interests of the people of Assam and Northeast... To protect Assam’s interest and integrity we have taken concrete steps. We carried out a land boundary agreement with Bangladesh following which fencing the border became possible.  We are ensuring that no Indian citizen is left out and no infiltrator’s name is there in the National Register of Citizens (NRC),” he said.

He also said that his government was also working to protect the identity of indigenous people by taking steps to implement the clause 6 of the Assam Accord, which provides for constitutional, legislative and administrative safeguards.