Gujarat gets back Modi’s mindspace 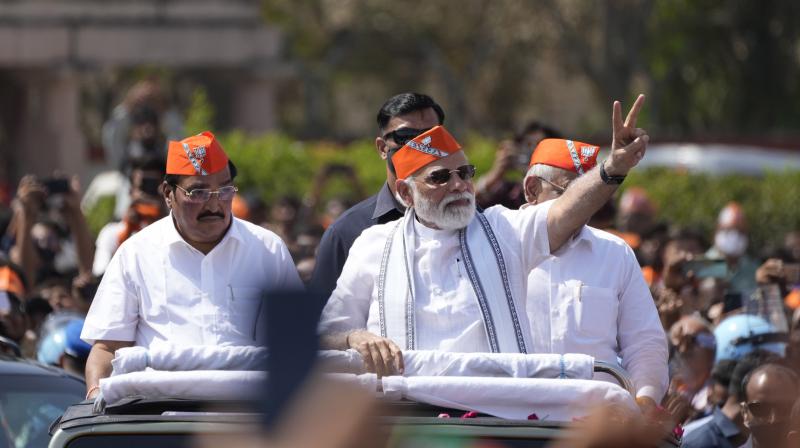 Prime Minister Narendra Modi waves to the public during a road show in Ahmedabad on Friday. — AP

New Delhi: Sensing that after Punjab, Arvind Kejriwal-led Aam Aadmi Party is zeroing in on Gujarat, the BJP has swung into action. A day after scoring a stunning electoral victory, Prime Minister Narendra Modi held a nine-kilometer long grand roadshow in Ahmedabad on Friday. Before leaving for his two-day visit, the Prime Minister tweeted, "Leaving for Gujarat, where I will be attending various programmes today and tomorrow. At 4 pm today will address a panchayat mahasammelan, which several representatives from panchayat raj institutions will attend."

With Gujarat election slated later this year, the Prime Minister has sounded the poll bugle with a massive rally of the elected panchayat representatives. Coinciding with the Prime Minister's visit is the RSS' three-day national meet in the state.

While the BJP has started its exercise to retain the Prime Minister's home state, the AAP is planning to make deep inroads with its proposed "Tiranga Yatra" across the tehsils and village panchayats in Gujarat. Both Mr Kejriwal and the party's chief minister-designate  in Punjab, Bhagwant Singh Mann, are planning to visit Gujarat. AAP has also launched a massive membership drive ahead of the Assembly polls.

AAP Delhi MLA and Gujarat in-charge Gulab Singh claimed that after the Punjab results "our phones have been ringing with people wanting to join the party." AAP's Gujarat spokesperson Yogesh Patel told a news agency that "with blessings of the people of Gujarat, AAP will emerge as the main contender to the BJP in Gujarat. The Congress has been rejected by the people of Gujarat."

Speaking to a television channel, another AAP leader, Akshay Marathe, said: "We are definitely going to Gujarat and Himachal Pradesh. These two states are on our radar. The party has been working in these states and we expect to have a big impact."

It may be recalled that in its debut performance in the local body polls early last year AAP emerged as a viable alternative to the Congress by bagging over 13 per cent of the vote share.

Making the party's national ambition amply clear, Raghav Chadha, AAP's Punjab co-incharge and Delhi MLA on Thursday claimed that the party has become a "national force". Mr Chadha said that he was "certain that Kejriwal will lead the nation one day and by 2024, AAP will be a national party and natural replacement of the Congress."

Incidentally, while both the BJP and AAP have swung into action, Congress, the main Opposition in the state till now, seemed to be missing in action. While the BJP and AAP top guns are pouring into this poll-bound state, the Congress' Gujarat unit awaits instructions from the high command.