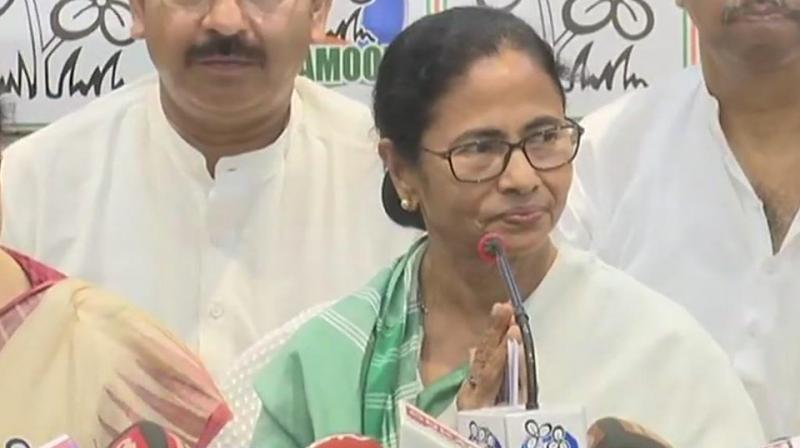 She said the outgoing TMC lawmakers whose names do not figure in the list will be drafted for party work. (Photo: ANI | Twitter)

Kolkata: The West Bengal Chief Minister and Trinamool Congress (TMC) supremo Mamata Banerjee on Tuesday announced a list of TMC candidates for all the 42 Lok Sabha seats of the state, dropping 10 sitting MPs.

While announcing, Banerjee said, “Trinamool Congress will field 41 per cent female candidate in the upcoming Lok Sabha elections. This is a proud moment for us.”

Allotting 41 per cent of the tickets to women, the list included a number of Bengali celebrities like Mimi Chakraborty and Nusrat Jahan.

She also attacked the BJP and the Modi government, claiming she had information that "VVIPs" were using helicopters and chartered flights to transport money to bribe voters.

Releasing the list, the West Bengal leader assailed the Centre over a host of issues including the Rafale deal, farm distress and shrinking employment opportunities.

She said the outgoing TMC lawmakers whose names do not figure in the list will be drafted for party work.

She also said that the party would also contest seats in Odisha, Assam, Jharkhand, Bihar and Andaman.

West Bengal votes in all the seven phases in this year's nation polls starting on April 11.