India   Politics  12 Mar 2017  UP win due to carrot of loan waiver, not because of note ban: Shiv Sena
India, Politics

UP win due to carrot of loan waiver, not because of note ban: Shiv Sena

The ties between BJP and Shiv Sena, who fought the recent civic elections in Maharashtra separately, have been strained. 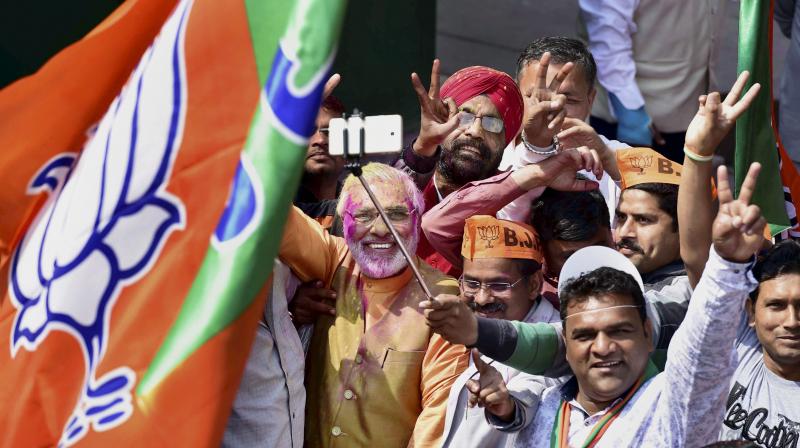 A Prime Minister Narendra Modi look-alike flashes victory sign along with other BJP workers as they celebrate the party’s victory in the assembly elections. (Photo: File)

Mumbai: Shiv Sena today attributed BJP's big win of BJP in Uttar Pradesh to the "carrot" of loan waiver dangled to farmers by Prime Minister Narendra Modi ahead of polls and said it was not a vote on demonetisation.

The ties between the two allies, who fought the recent civic elections in Maharashtra separately, have been strained and Sena has often needled the BJP and Modi.

"The Uttar Pradesh mandate is because of the loan waiver promise made by Prime Minister Modi to farmers during his election campaigning. It is not a reflection of demonetisation decision," an editorial in party mouthpiece Saamna said on Sunday.

"The campaign in UP benefited BJP in neighbouring Uttarakhand. However, in Punjab, the BJP and Akalis bit the dust. It has even failed to win 15 seats in Goa, despite having a leader like Manohar Parrikar," said the editorial.

"Manipur too has not given a strong mandate to BJP. Thus people not voting for the party in these states should be equally considered when UP elections are discussed," it said.

The editorial also invoked the issue of Ram temple in Ayodhya and wondered whether BJP would initiate its construction.

The editorial commented that Modi succeeded in polarisation of votes by making "shamshan-kabristan" remarks and playing the Hindutva card during the UP campaign.

"It would have been better, had he (Modi) played the cards of uniform civil code and Ram Mandir during the campaign," said the editorial.

The editorial further stated that as compared to the leadership of Nitish Kumar in Bihar and Mamata Banerjee in West Bengal, the "childish leadership" of Akhilesh Yadav and Rahul Gandhi was rejected by the people of UP.

"Yadavs and Dalits have voted for BJP to teach a lesson to Akhilesh Yadav. Modi and Amit Shah have played the social engineering arithmatic very well and that helped the party in winning big in UP elections," said the editorial.