SP-BSP divide UP among themselves, say alliance with Congress 'pointless'

The parties take 38 seats each, to not contest Congress bastions Amethi and Raebareli. 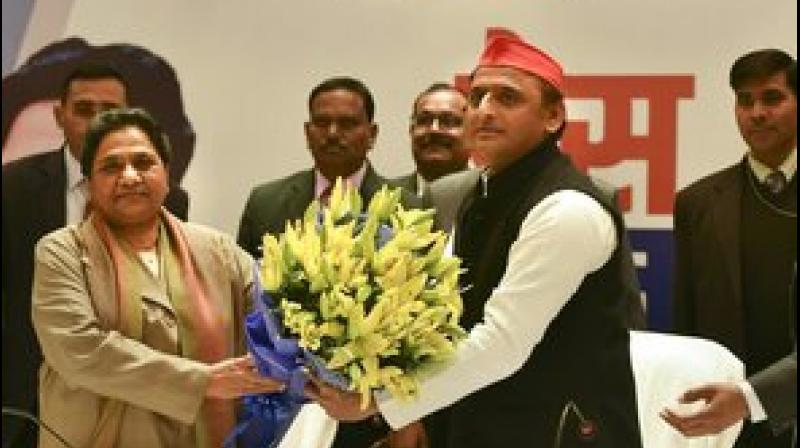 Lucknow: In the recently concluded joint press conference held by the Bahujan Samaj Party supremo Mayawati and Samajwadi Party chief Akhilesh Yadav, they finally announced the “mahagathbandhan” between the two parties for the upcoming general elections -- in order to oppose the “narrow casteist and communal” politics of the BJP regime in the state of Uttar Pradesh

Mayawati said out of the total 80 Lok Sabha seats in UP, both the major parties would get 38 each. Out of the remaining four, two have been left for smaller parties and the other two, Amethi and Raebareli, represented by Rahul Gandhi and Sonia Gandhi respectively, have been kept aside for them.

Mayawati also said that an alliance with the Congress serves no point and hence only SP and BSP were coming together to oust BJP from the state.

“The policies of the Congress are the reason why parties like ours came into existence in the state. Whether it is the Congress or the BJP that comes to power, it's the same thing. There is not much benefit to us from tying up with the Congress," Mayawati said.

Mayawati also urged secular parties to keep their differences aside, come together to defeat the BJP at all costs.

“This (the alliance) will give ‘guru-chela’ Prime Minister Narendra Modi and BJP president Amit Shah sleepless nights," Mayawati said in her speech.

Referring to the Lucknow guest house incident that had made SP and BSP sworn enemies, Mayawati said, “For the sake of the nation, we decided to rise above that and again come together.”

Akhilesh Yadav, during his speech, also mentioned that the BJP has made Uttar Pradesh a "jaati pradesh."

“Instead of bringing together people in the common terms of brotherhood of different faiths, they have resorted to diving people on the basis of religion,” Akhilesh said.

Praising Mayawati, he also said, "I want to tell all my workers that any insult to Mayawatiji is a personal insult to me."

He also added, “We have come together to rid the state and country of BJP’s religion and caste politics. This alliance has been formed to destroy BJP.”

“BSP and SP have decided to come together to clean BJP out of the state, and battle BJP's atrocities,” Akhilesh said at the end of his speech.

He added: “Scared of the BSP-SP alliance, BJP will try to create an environment of hate, fuel riots, divide people, but we must keep calm, foster a sense of brotherhood among all.”

In response to a reporter’s question, Mayawati said, “This is not an alliance only to win the polls but to also represent the interests of the common people and Dalits, Muslims and other religious minorities."