Achche din only when Congress in power, says Rahul Gandhi

The Talkatora Stadium echoed with laughter when Mr Gandhi took a jibe at the Prime Minister on his oft-repeated word, “mitron.” 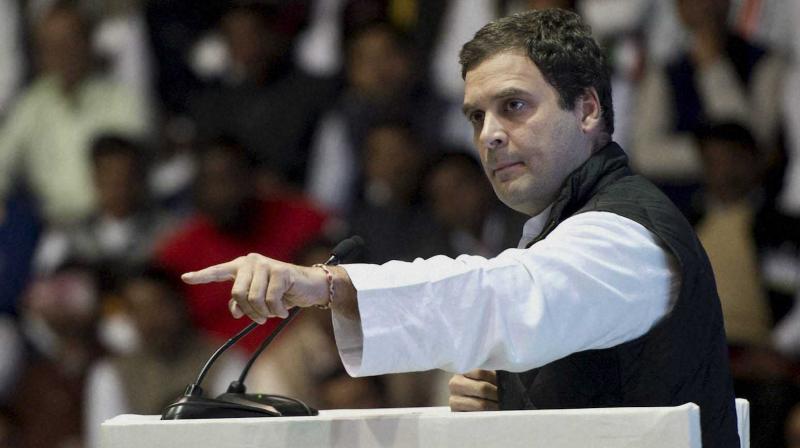 New Delhi: Congress scion Rahul Gandhi was at his sarcastic and rhetorical best on Wednesday as he launched a scathing attack on Prime Minister Narendra Modi’s demonetisation decision, packing in snide remarks about his love for yoga and yet inability to do the simplest of asanas, the padmasana.

Mr Gandhi, who returned from his 10-day New Year break on Tuesday, also ripped into the much-touted “achche din”, saying, “Achche din will come only when Congress returns to power in 2019,” thus setting the tone for the Congress’ campaign for the forthcoming Assembly polls.

Addressing the Jan Vedna meet called by the party on the demonetisation issue at Delhi’s Talkatora Stadium, the Congress vice-president hit out at the Prime Minister’s contentious policy.

“Not a single noted economist in the world backed the move,” he said and added that this is the first time an Indian Prime Minister is being “ridiculed the world over” for taking such an “ill-conceived” decision.

Alleging that the economy has gone back 16 years under Mr Modi, he said that the Prime Minister must ask why the demand for Mnrega has suddenly surged and why people are migrating to villages instead of cities.

Rebutting charges that the Congress did nothing for the country, he said that what  the  BJP has done in its two-and-a-half years by targeting national institutions, the Congress could not achieve in 70 years.

Describing the Reserve Bank of India, the Election Commission and the judiciary as the “soul” of India, he accused the Prime Minister of “destroying” their autonomy.

Trying to highlight the fascist tendencies of the saffronites, Mr Gandhi said, “Narendra Modi rules by instilling fear.” And then turned his focus to the media which was also the target of his acerbic tongue. “During Manmohan Singhji’s tenure they (media) used to write freely and without any fear. Now they say, ‘We can’t write, we will lose our jobs, please try and understand’”. Then, looking at the media gallery, he said, “We do understand.”

Taking potshots at the Prime Minister, an avid yoga practitioner, for not being able to do padmasana, Mr Gandhi, who is often at the receiving end of the BJP and Mr Modi’s ridicule, decided to give it back. “I saw the Prime Minister doing yoga on yoga day. He did all kinds of asanas but he could not do the padmasana,” he quipped and then stung harder, “I’ve done some yoga. I’m not very good at it, but my yoga guru used to tell me that if you practice yoga regularly, you can very easily do the padmasana. But it seems the PM can’t even do the padmasana.”

Mocking the Prime Minister for his “gimmickry” of sweeping roads to propagate “swachch Bharat”, Mr Gandhi said, “He does not even hold the broom properly.”

The Talkatora Stadium echoed with laughter when Mr Gandhi took a jibe at the Prime Minister on his oft-repeated word, “mitron.”

The Jan Vedna Sammelan (vedna in Hindi means pain), attended by members of the Congress Working Committee, Congress chief ministers, AICC office bearers, MPs, pradesh Congress committee chiefs and state leaders, announced the second phase of protest against demonetisations would include RBI gherao on January 18 followed by Jan Vedna panchayats in all districts where questions will be put to the Prime Minister. A chair will also be kept at these panchayats for the PM.

BJP reacted by saying that the Congress leader was voicing his own and not the poor’s pain and accused Mr Gandhi of being a spokesperson for those with black money.