COVID-19 effect: Coming Monsoon Session of Parliament to be a unique affair

Staggered timings: proceedings in the Rajya Sabha will be held from 9 am till 1 pm while that of the Lok Sabha will be from 3 pm to 7 pm 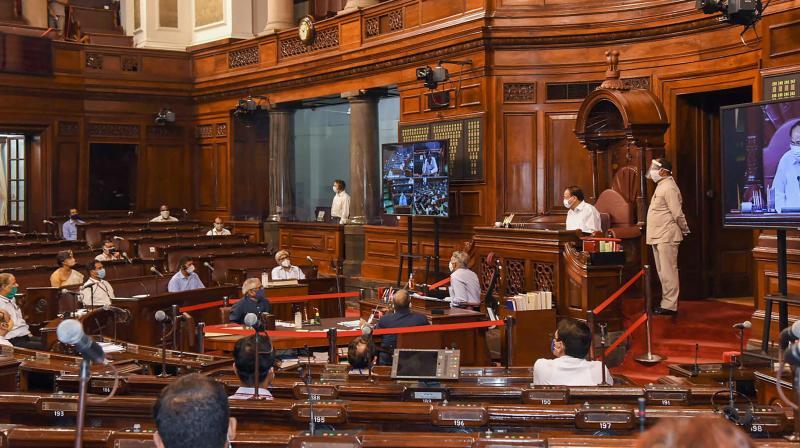 New Delhi: In a first of its kind of arrangement in the history of Indian Parliament, Rajya Sabha and Lok Sabha will have turn-wise sittings keeping in mind the social distancing norms owing to the coronavirus pandemic during the forthcoming Monsoon Session between September 14 and October 1.

On the first day of the Session on September 14, the lower House will meet from 9 am to 1 pm while sitting of the Upper House will be from 3 pm to 7 pm. The Zero Hour will be for 30 minutes.

On subsequent days, proceedings in the Rajya Sabha will be held from 9 am till 1 pm while that of the Lok Sabha will be from 3 pm to 7 pm.

Lok Sabha Speaker Om Birla on Thursday said that social distancing norms will be strictly followed in the Monsoon Session of Parliament in view of the pandemic, adding, "A total of 257 members will sit in the Lok Sabha chamber and 172 in the visitors gallery of the Lok Sabha. In the Rajya Sabha chamber, there are arrangements for 60 MPs whereas 51 can sit in the visitors gallery of the Rajya Sabha. Lok Sabha and Rajya Sabha session will go on consecutively. Both houses will have screens for both Lok Sabha and Rajya Sabha proceedings. There are arrangements for having a virtual address in the Lok Sabha. The sound system has been integrated of both houses for all to participate in the session."

The Speaker informed that all employees of Parliament too, will be tested for coronavirus and have to undergo RT-PCR test.

“Attendance of parliamentarians will be recorded through a mobile app. There will be fibre-glass sheets separating their seats and those in visitors gallery will need to go to the podium on their turn to speak. Lok Sabha MPs sitting in the Rajya Sabha will have the option to use the sound system as it has been integrated for both houses," he added.

Birla said that parliamentarians and officials will try to limit the use of paper and go digital.

The government had initially decided to do away with the Question Hour, however after protests by the Opposition parties led by the Congress, the Centre later informed that written questions would be allowed during the Session.

Though the Session is being conducted amid escalating tension along the Line of Actual Control with Indian and Chinese troops engaged in violent clashes, including the Galwan confrontation where India had suffered heavy casualties, and the Centre’s measures to counter the raging pandemic, the possibility of the Opposition bringing the Centre on the mat over these issues, seem remote owing to restricted proceedings of Parliament.