Speaker maintained that the legislators should have approached him instead of rushing to the Governor and Supreme Court. 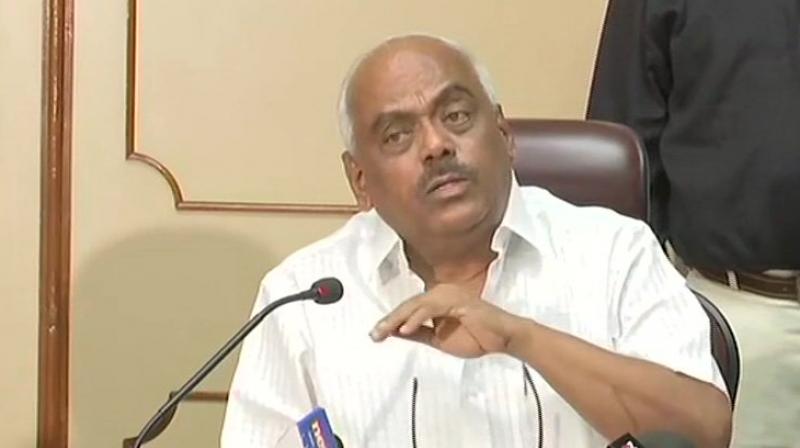 he Speaker has not accepted the resignations as yet. (Photo: ANI)

Bengaluru: Karnataka Assembly Speaker K R Ramesh Kumar, on Thursday, briefed the media on the political developments in Karnataka after meeting the rebel MLAs. Kumar justified his position and said he has always followed the rules and the law. He also said he was not informed about the resignations.

Over last six days, 16 legislators of Congress-JD(S) have resigned bringing the coalition government’s tally below the requisite majority mark. The Speaker has not accepted the resignations as yet.

Stating his position on July 6, when 13 MLAs had resigned, Kumar said, “I felt hurt when I saw some news that I am delaying the process. Governor informed me on July 6. I was in my office till then and later I left for personal work. Before that, no legislator informed my office that they were coming to meet me.”

He further said, “On July 6, I was in my chamber till 1.30 p.m. The MLAs came there at 2 p.m., they didn't even take prior appointment. So, it is untrue that I left the office because they were coming.”

The Speaker had acknowledged the receipt of resignation letters but he had said that he would go through the letters only on Monday (July 8) as the weekends are official holidays.

Speaker maintained that the legislators should have approached him instead of rushing to the Governor. He said, “They (MLAs) don't communicate to me and rush to the Governor. What can he do? Is it not misuse? They approached the Supreme Court. My obligation is to the people of this state and the Constitution of this country. I am delaying because I love this land. I am not acting in haste.”

The rebel MLAs approached the Supreme Court seeking its intervention. Former Attorney General Mukul Rohatgi, appearing for the rebel MLAs said, “The Speaker has made himself scarce. He is not doing what he is expected to do.”

Reacting on the apex court’s order, Kumar said, “The Supreme Court has asked me to take a decision. I have video recordings of all the developments and I will send them to the Supreme Court.”

On the apprehensions of the rebel MLAs, Kumar said, "They (rebel MLAs) told me that some people had threatened them and they went to Mumbai in fear. But I told them that they should have approached me and I would have given them protection. Only three working days have elapsed but they behaved like the earthquake occurred."