Raids at senior advocates' premises nothing but 'gross abuse of power': Opposition to PM

The raids are being carried out in both Delhi and Mumbai in connection under violation of Foreign Contribution (Regulation) Act (FCRA). 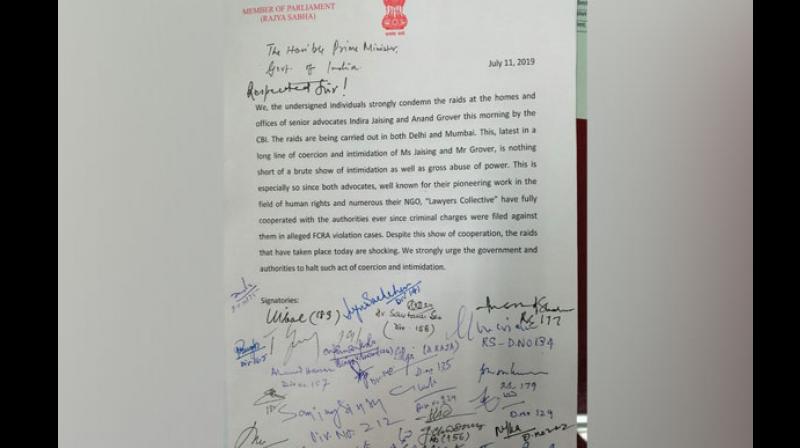 ‘This, latest in a long line of coercion and intimidation of Jaising and Grover, is nothing short of a brute 'show of intimidation' as well as 'gross abuse of power',’ the letter read. (Photo: ANI)

New Delhi: The opposition parties on Thursday came out in support of senior advocates Indira Jaising and Anand Grover, condemning the ongoing raids at their homes and offices by the CBI early this morning.

A group of Opposition MPs in Rajya Sabha have written to PM Narendra Modi condemning the raids on senior advocates Indira Jaising and Anand Grover in a FCRA case, say 'it is a brute show of intimidation and gross abuse of power' pic.twitter.com/xSq1iKDf43

In a joint letter to Prime Minister, the opposition said, "We, the undersigned individuals strongly condemn the raids at the homes and offices of senior advocates Indira Jaising and Anand Grover this morning by the CBI."

The raids are being carried out in both Delhi and Mumbai in connection under violation of Foreign Contribution (Regulation) Act (FCRA).

"This, latest in a long line of coercion and intimidation of Jaising and Grover, is nothing short of a brute 'show of intimidation' as well as 'gross abuse of power'," the letter read.

Urging the government and authorities to halt such act of coercion and intimidation, the leaders said: "This is especially so since both advocates, well known for their pioneering work in the field of human rights and numerous their NGO, "Lawyers Collective" have fully cooperated with the authorities ever since criminal charges were filed against them in alleged FCRA violation cases."

The said that it is "shocking" that the raids have taken place today despite their constant cooperation.

Earlier in the day, Jaising told reporters that "Mr Grover and I are being targeted for the human rights work we have done over the years."

The CBI officials, however, refused to comment on the recovery made during the raids.

The probe agency had, last month, registered a case against NGO Lawyers Collective, whose founding members are Jaising and Grover on the charges of violating rules under the FCRA.

The FIR was registered based on a complaint by the Ministry of Home Affairs against the NGO.

The investigative agency said that Jaising had received Rs 96.6 lakh remuneration from foreign contributions made to the NGO during her term as Additional Solicitor General (2009-14).

The complaint also alleged that the expenses of her foreign trips as ASG were borne by the NGO without the Home Ministry's prior approval.

In a statement, the Lawyers Collective (LC) had expressed "shock and outrage at the action of the CBI" in registering an FIR against them.