In the video, the Khanpur MLA is seen holding two revolvers in his hands. 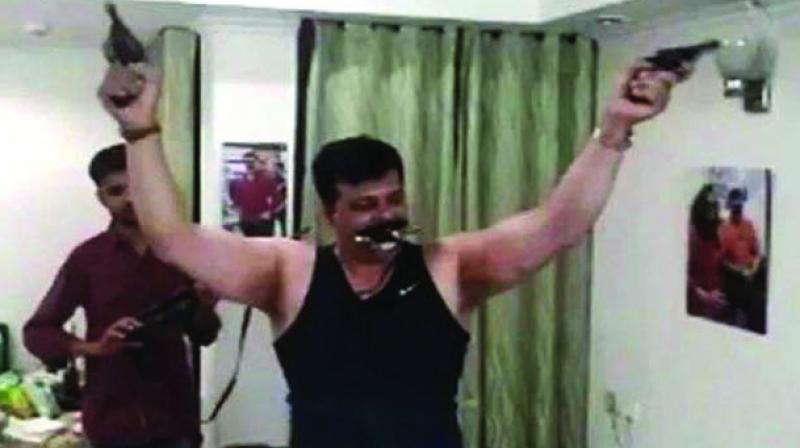 MLA from Khanpur in Uttarakhand, Pranav Singh Champion, is seen wielding guns in the video grab.

New Delhi: In a major embarrassment to the BJP, a video of its suspended MLAs from Uttarakhand, Pranav Singh Champion, purpotedly showing him dancing to a popular Bollywood song and brandishing guns along with his supporters went viral on Wednesday.  In the video, the Khanpur MLA is seen holding two revolvers in his hands and a carbine hanging from his shoulder and is sipping his drink from a glass as his friends cheer him on. Barely 10 days back the BJP had to face an embarassement over an incident in Madhya Pradesh involving its senior leader Kailash Vijayvargiya's MLA son, which was pointed by Prime Minister Narendra Modi himself in the parliamentary party meeting. Sources disclosed that though the BJP has issued a notice to him, the party could even expel the Khanpur MLA as not only he was seen promoting gunculture but was also heard using abusive language.

However, an unfazed Champion said that the video was a conspiracy against him and asserted that the weapons were licensed and not loaded.  Champion was among the Congress MLAs who had rebelled against the then chief minister Harish Rawat and crossed over to the BJP in 2016.

“I am not pointing towards anyone or threatening anyone.What's the crime? Is drinking alcohol and keeping licenced gun a crime?” he asked.