‘I have asked my legal people to look into it. I'll have to take a legal remedy to protect my rights,’ he said. 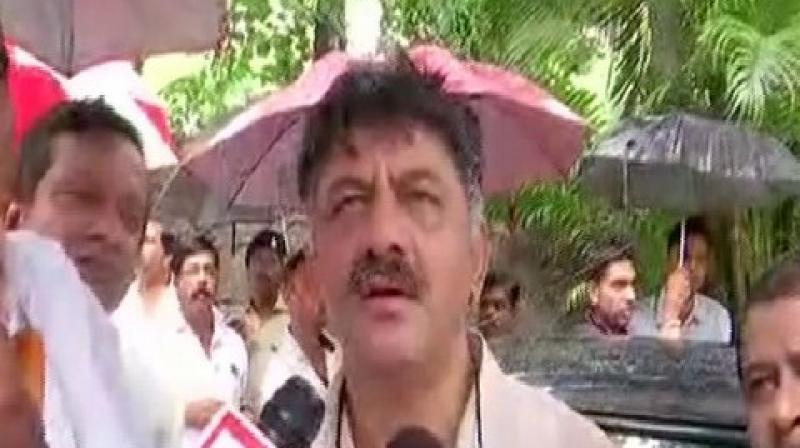 After the resignations of two Congress MLAs- T Sukumar and MTB Nagraj on Wednesday, the total number of resignations touched 17. (Photo: ANI)

Bengaluru: Congress leader and Karnataka Irrigation minister DK Shivakumar, who on Wednesday was prevented by Maharashtra police from entering the Mumbai hotel where dissident rebels were staying, said that he is considering legal options.

Talking to media on Thursday at Kumara Krupa Guest House, Shivakumar said, "Since the hotel people in Mumbai yesterday rejected my reservation after making me stand for hours together, I have asked my legal people to look into it. I'll have to take a legal remedy to protect my rights".

He, however, expressed optimism that the rebel MLAs would return.

"We have confidence that the MLAs will be with us. I hope they will come back and withdraw their resignation," he said.

Shivakumar had rushed to Mumbai on Wednesday morning to pacify the rebel MLAs who were staying at Renaissance hotel was forced to sit outside the hotel after being denied entry and not allowed to speak to rebel MLAs.

Later, Shivakumar was detained by Mumbai Police along with Milind Deora and other Congressmen who were then kept at Kalinga University rest house.

After the incident, the minister said that it was as a "matter of shame" that he was "forcefully deported" back to Bengaluru.

"Mumbai is known for its hospitality. I had booked a room there and was on an official visit to meet my friends and colleagues, but BJP and officials misused their authority. It's a matter of shame," said Shivakumar on Wednesday.

Last week, the 13-month old Congress-Janata Dal(Secular) government slumped into crisis following the resignation of MLAs from the membership of the state Assembly.

After the resignations of two Congress MLAs- T Sukumar and MTB Nagraj on Wednesday, the total number of resignations touched 17.

The Congress has been accusing the BJP of conspiring to topple the coalition government in Karnataka. The ruling alliance is making all efforts to protect its government which seems to have fallen short of a majority.