Banerjee claimed the advisories were being sent to the state to stop her from investigating cases of electoral malpractices. 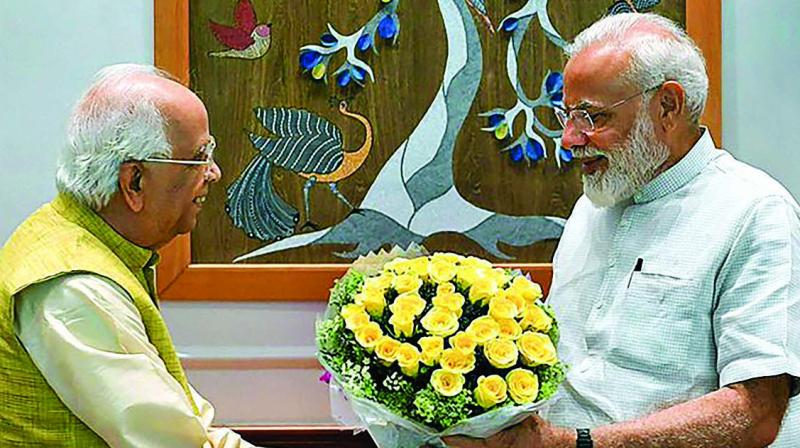 New Delhi: The bitter battle over West Bengal moved to the nation’s capital on Monday as governor Keshari Nath Tripathi met Prime Minister Narendra Modi and home minister Amit Shah and apprised them of the situation in the state, that is in the grip of political violence since the Lok Sabha polls. Speculation is rife in Opposition circles that the Centre may be planning to impose President’s Rule in the state ahead of the Assembly elections due in 2021.

However, the governor, who met the PM and Mr Shah, told the media that there was no discussion on imposing President’s Rule. “I have apprised the Prime Minister and the home minister about the situation in West Bengal. I can’t disclose details,” he said.

Mr Tripathi’s visit to New Delhi came a day after the Centre issued an advisory to the West Bengal government over the relentless political violence in the state following the general election, in which the BJP managed to wrest 18 Lok Sabha seats in the state, and the ruling Trinamul Congress’ Lok Sabha tally fell to 22 from 34.

Reacting to the governor’s visit to New Delhi, state chief minister and Trinamul Congress boss Mamata Banerjee claimed that the BJP government at the Centre wanted to “turn Bengal into another Gujarat”. She also evoked Bengali pride and said she would not allow her state’s image to be hurt.

“Who is planning to disturb the peace in Darjeeling and Jangalmahal? Is there not a conspiracy to turn West Bengal into another Gujarat? I request the Centre not to play with fire. Who came from Bangladesh to canvass for the BJP? Is infiltration only by the minorities? This is a planted game,” she said in Kolkata.

Ms Banerjee claimed the advisories were being sent to the state to stop her from investigating cases of electoral malpractices.

On Sunday, in an advisory, the home ministry expressed “deep concern” over the continuing violence in West Bengal, saying the “unabated violence” even after the Lok Sabha polls were over appears to be a failure on the part of the state government.

The Trinamul Congress government in the state had hit back at the Centre saying there were a few “stray post-poll clashes” in West Bengal, and that the situation in the state was “under control”.

Sources in the party, however, blamed the Trinamul Congress for the BJP’s stunning performance, saying a large number of anti-incumbency votes turned to the BJP due to the violence unleashed by her after the panchayat polls last year.

The BJP, on its part, said it was not demanding that President’s Rule be imposed, but it would “defy” the Trinamul Congress government’s curbs on its political programmes, including victory processions.

The ruling Trinamul Congress took out victory marches in the seats where it had won in the Lok Sabha polls, but the state government prohibited the saffron party from doing so by imposing Section 144 CrPC, which bars any assembly of five or more people, on the ground that it may lead to violence, BJP general secretary Kailash Vijayvargiya said.

The BJP has announced a protest in the state on June 12 against the killings of its workers, allegedly by people who are linked to the TMC.