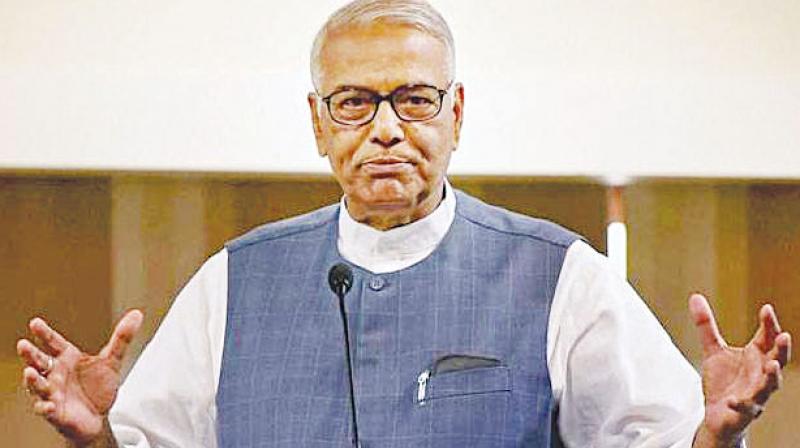 Speaking at a meet-the-press programme in Bhopal, the former Union finance minister also dismissed as a non-issue the controversy over the alleged misuse of INS Viraat by former Prime Minister Rajiv Gandhi. (File)

Bhopal: Former BJP leader Yashwant Sinha has claimed then Prime Minister Atal Bihari Vajpayee was set to dismiss Prime Minister Narendra Modi, Gujarat Chief Minister at the time, after the 2002 post-Godhra riots, but withheld the decision as Home Minister LK Advani had threatened to resign from the Cabinet on the issue.

Speaking at a meet-the-press programme in Bhopal, the former Union finance minister also dismissed as a non-issue the controversy over the alleged misuse of INS Viraat by former Prime Minister Rajiv Gandhi.

"After the communal riots in Gujarat, Atal Bihari Vajpayee had decided that then state chief minister Narendra Modi should resign. While going to the national executive committee meeting in Goa in 2002, Atal ji had made up his mind that the Gujarat government would be dismissed if Modi ji refused to resign," he claimed.

"There was a meeting within the party. According to my information, Advani ji had opposed this (dismissing the Modi government) and he told Atal ji that if Modi ji is dismissed then he (Advani) would resign from the government. So, he (Vajpayee) withheld the decision and Modi ji continued," Sinha said.

In reply to a query on PM Modi's allegation that late PM Rajiv Gandhi used INS Viraat as a "personal taxi", Sinha said these are non-issues and that former naval officers had already issued clarifications on it.

"It is not as per the dignity of a prime minister to speak lies like this," Sinha said, adding the Lok Sabha polls were being fought on PM Modi government's performance and not on the country's history.

"It is unfortunate that the issue of Pakistan is being raised in the elections. He hyphenated our country with Pakistan. Are we a country of Pakistan's category? There is no talk about China, which must be feeling happy with the Pakistan rhetoric," claimed the former foreign minister.

"This is being done because China's mention doesn't generate a reaction like that of Pakistan does," he added.

Accusing the PM Modi government of playing "mischief" with statistics, Sinha said GDP data during the previous UPA government was higher than during the current NDA government.

"The next government will get a broken economy," the bureaucrat-turned-politician said.

Sinha blamed PM Modi for lowering the language of the political discourse. "It is expected from a PM to use dignified language but this is not happening."

He said the elections to the Bhopal Lok Sabha seat would determine the future course of the country, and whether it wanted to go for social harmony or social divide.

Congress veteran Digvijaya Singh is pitted against the BJP's Pragya Singh Thakur, a 2008 Malegaon blast accused, in the Bhopal seat which will vote on May 12.