The success formula of BJP in Uttar Pradesh

It is obvious that the anti-Congress wave of 2014 organically converted into a Modi Wave in Uttar Pradesh in 2017. 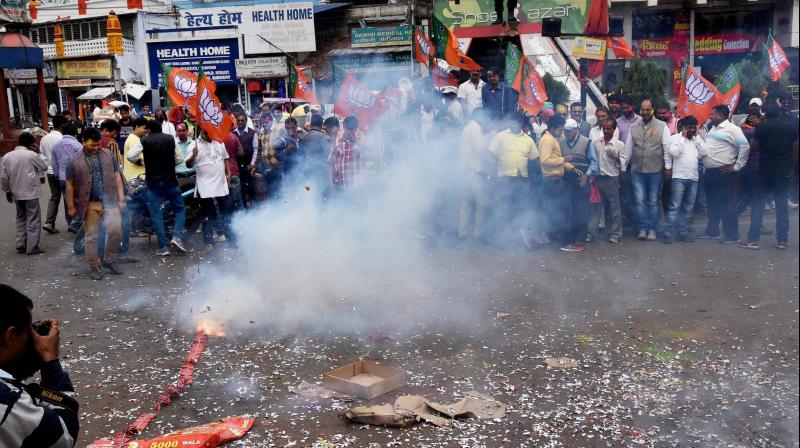 BJP supporters burst crackers as early trends show the party's win in the UP and Uttarakhand Assembly elections. (Photo: PTI)

Lucknow: The Bharatiya Janata Party’s campaign began in Uttar Pradesh Assembly polls where it had left off in the general elections of 2014, winning 71 of the state’s 80 parliamentary constituencies.

It is obvious that the anti-Congress wave of 2014 organically converted into a Modi Wave in Uttar Pradesh in 2017.

First-time voters, as well as the traditional vote base of the Samajwadi Party and the Bahujan Samaj Party – the backward castes and Dalits -- had voted for Narendra Modi in 2014. The young voters were with Modi this time too.

And to garner the backward castes vote – almost 50 per cent of the state’s voting population – the party had in 2014 participated in caste associations, made members of this community its political faces but without losing sight of its Hindutva agenda in the wake of the Muzaffarnagar riots while constantly stating that the SP-BSP had ruined the state. The party’s strategy was and has been to belittle the SP and the BSP among its popular vote base, reminding them of the prudence of voting someone to power who ‘has not done much for them’.

This time too, the BJP applied that inclusive strategy, concentrating on the non-Yadav Other Backward Classes, appointing almost 40 per cent of its candidates from that pool. The party gave several seats to its two allies – the Apna Dal and Suheldev Bharat Samaj Party. These two parties are backed by backward castes.

The party also kept its Hindutva pitch less shrill in the overall political rhetoric during campaign. It must have learnt its lesson from Bihar.

And to top it all, was that one national issue that dominated both the Assembly campaign and mass sentiment in Uttar Pradesh – demonetisation.

The merits of Modinomics may be debatable on this issue, but the results show that Modipolitics has definitely won on this score.

While the SP-BSP was at pains to explain to all that demonetisation was ‘all pain and no gain’, the BJP underplayed the ‘pain’ and touted the ‘gain’ as Modi’s fight against corruption -- to give the poor its rightful share in the country’s growth story. The sense of class-revenge demonetisation invoked may have just seen the BJP through in Uttar Pradesh in 2017.

As vote shares are still not in, it is still unclear how much the fight between the SP-Congress or the SP-BSP benefited the BJP in vote division. Also, did Muslims vote en masse for just one opposition party?