After mobile, now family pack for getting bail: PM's jibe at Gandhi family

PM Modi on Sunday said that there is a trend to get ‘family pack of bail’ now. 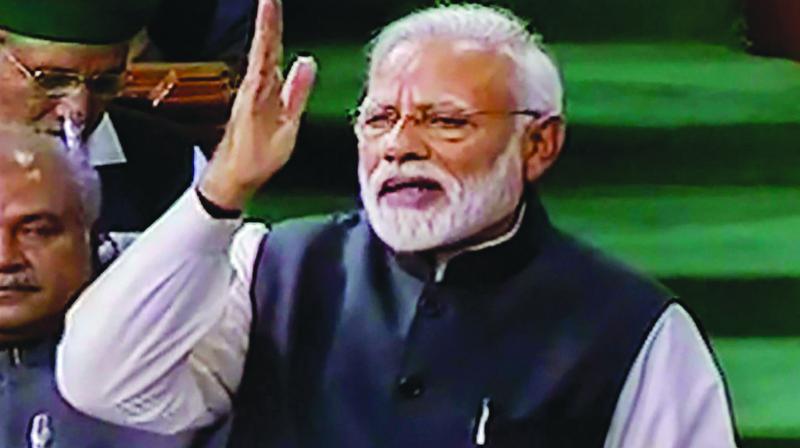 The bail has been granted by the court to Congress president Rahul Gandhi and Gandhi for their alleged involvement in the multi-crore National Herald scam. (File Photo)

Tiruppur: Prime Minister Narendra Modi on Sunday said that there is a trend to get ‘family pack of bail’ now, in an apparent reference to the family of UPA chairperson Sonia Gandhi.

The bail has been granted by the court to Congress president Rahul Gandhi and Gandhi for their alleged involvement in the multi-crore National Herald scam.

Sonia’s son-in-law Robert Vadra was recently granted interim bail in a money laundering case by a special court at Patiala House in New Delhi till February 16 in which he has been interrogated by the Enforcement Directorate (ED) for three consecutive days.

Addressing a public meeting here, Prime Minister Modi said: “We have heard of family packs in mobile recharges and ice creams. Now there is a family pack for getting a bail too.”

“Look at the change in India today. Those who thought that they could never be questioned are made to give an account for their loot now,” he said.

Prime Minister Modi also denied if the BJP has done any tampering with the social justice system in the nation. “It was the Third Front government, where both DMK and Congress were a party in removing reservation in promotions for SCs and STs.”

Taking a jibe at the Opposition for abusing him, he said: “Opposition’s political culture of abusing Modi may give them some space in television but the elections are fought on one’s vision for the nation, not slander and attack.”

“Time and again they have tried to mislead the farmers, poor and youngsters of the nation,” he said while addressing a public rally. He also criticised Congress leader Sandeep Dikshit’s comment on Chief of Army Staff General Bipin Rawat where he had allegedly dubbed him as “a street goon.”

Prime Minister Modi, who on Sunday address three major public meetings—one each in Andhra Pradesh and Karnataka apart from one in Tamil Nadu, said: “By 2022, we are aiming to achieve housing for all. 1.3 crore houses have already been built in the last four years.”

In Guntur, Andhra Pradesh, he launched a scathing attack on Chief Minister N Chandrababu Naidu, calling him a master in backstabbing and destroying the dreams of the state’s people.

“He is senior in forging new alliances. He is scared of losing the elections. He is a master having backstabbed his own father-in-law, N T Rama Rao. He is senior in destroying the dreams of Andhra Pradesh’s people. What has happened to Chandrababu Naidu,” he asked, while addressing a public meeting called ‘Praja Chaitanya Sabha.’

“The leader of the TDP who should have worked for Congress-free India is now supporting the Congress party. He has never been able to win a second election and is afraid of losing badly in polls. He is attempting to stabilise his son in politics,” the Prime Minister said.

“On the foundation of lies, they are playing the game of ‘Mahamilawat’ (adulteration). Such is the effect of the company that the Chief Minister of Andhra Pradesh has also forgotten the development of the state and has jumped in the competition of abusing Modi,” he said.

On the protests by TDP workers against his visit, Prime Minister Modi said: “I am indebted to the TDP who has told me to go back and wants me to sit in Delhi once again. I have full faith in crores of people that they will fulfill the wish of the TDP and re-elect Modi.”

Outlining that projects worth hundreds of crore concerning petroleum infrastructure were inaugurated by him in the state, he said: “These projects are significant not only for Andhra Pradesh but also for the energy security of the country.”

Earlier, Modi laid the foundation of the Krishnapatnam BPCL coastal terminal project and dedicated to the nation the ONGC Vasishta development programme and the Visakhapatnam underground petroleum storage centre.

In Hubli in Karnataka, Prime Minister Modi attacked the JDS-Congress government. “The government is Karnataka is a helpless government with a helpless Chief Minister, who is used as a punching bag. He gets the threats on a daily basis and his whole energy is lost in saving his chair from the Congress.”

“This is the ‘Majboor Model’ which they want to impose at the Centre as they want a ‘Majboor government’ in which the leader would be just sitting in a corner and crying while ‘Naamdar’ takes the decision from his ‘Mahal,” he said.

The Prime Minister also alleged that the Congress is waiving off loans in various states for votes. “Since decades they have been playing the same game. For votes, they come up with a 10-year plan to waive off farm loans,” he said.

“They lie and in reality loan of only 25-30 out of 100 farmers are waived off. There too, farmers get only a few hundred rupees and rest goes into pockets of middlemen,” he said.