Mamata accuses BJP of drama over ‘The Accidental Prime Minister’

Describing PM Modi as ‘Gabbar Singh’ the Trinamool Congress chief Mamata bantered that he neither smiles nor can speak well. 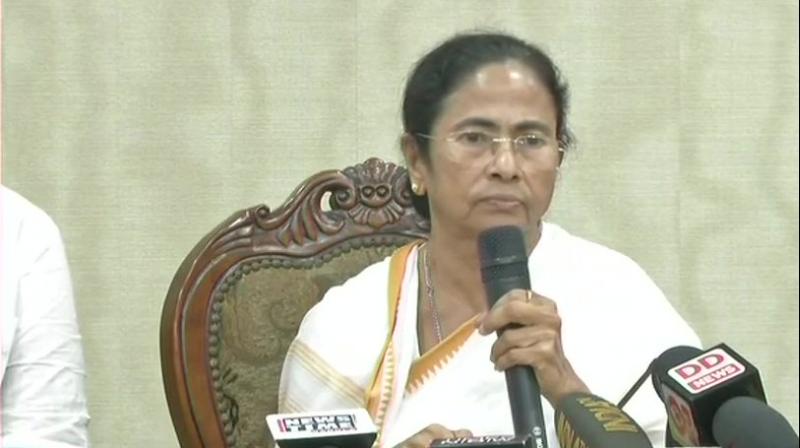 ‘A film has been released suddenly ahead of the elections...Accidental PM! Everyone is accidental PM. I fail to understand the meaning of accidental PM,’ said CM Mamata Banerjee. (Photo: ANI | Twitter)

Kolkata: Apparently standing by former Prime Minister Manmohan Singh over the controversial depiction of his role in the Bollywood film, ‘The Accidental Prime Minister’ Chief Minister Mamata Banerjee on Wednesday accused the BJP of making a "drama" ahead of the Lok Sabha elections. Without taking the name of present PM Narendra Modi she predicted that another film 'Disastrous PM' would be made on him in the future also.

Describing PM Modi as "Gabbar Singh" the Trinamool Congress supremo bantered that he neither smiles nor can speak well. Addressing a programme at Barasat in North 24 Parganas CM Banerjee said, "A film has been released suddenly ahead of the elections...Accidental PM! Everyone is accidental PM. I fail to understand the meaning of accidental PM."

Her warning came after the Congress activists' massive protests which erupted outside the cinema halls in the city where the film 'The Accidental Prime Minister' was being screened after its release. Alarmed by the angry demonstrations by the Congress supporters who shouted slogans with party flags and burnt the effigy of PM Modi, the police stopped the screening of the film in at least two halls.

One of the two is INOX in central Kolkata while the other is Indira Hall in Bhowanipore. In an oblique reference to PM Modi the Trinamool chief alleged, "You will also have to see like you are showing now. Look at your face on the mirror properly. You can not even smile. You can not even talk properly. The people get panicked seeing him. They say: Gabbar Singh is coming, Jabbar Singh is coming."