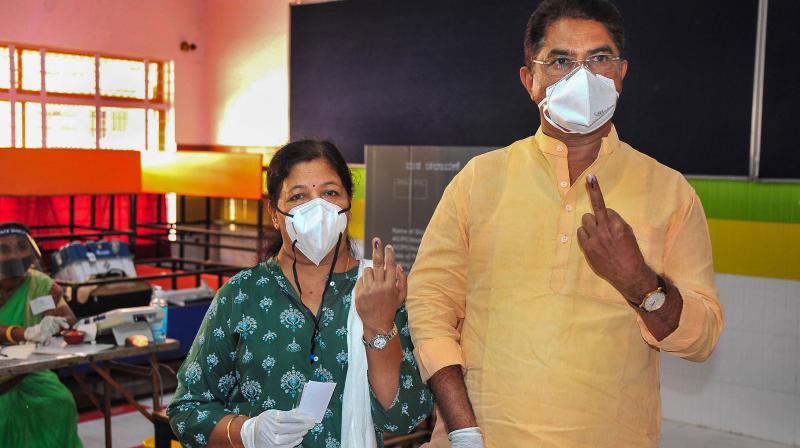 Karnataka Revenue Minister R Ashoka and his wife Pramilarani show their fingers marked with indelible ink after casting their votes for the state by-polls, at Rajarajeshwari Nagar in Bengaluru. (PTI)

Bengaluru: The ruling BJP has continued to maintain its lead over opposition Congress and JD(S) in the bypolls for two assembly constituencies in the state, poll officials said on Tuesday.

Votes polled in the November 3 byelections to Sira in Tumakuru district and Rajarajeshwari Nagar (R R Nagar) in the city were taken up for counting at 8 am and the results are expected to be out in a few hours from now.

Trends show JD(S) that had won the seat in the 2018 assembly elections being relegated to the third place with the party candidate Ammajamma B securing 19,522 votes.

JD(S) is in third place here too with party candidate V Krishtramurthy so far securing 4,660 votes.

As the trends clearly showed BJP leading in both seats, the Chief Minister's office released a video of Ministers R Ashoka, Basavaraj Bommai, Seiramulu, Byrathi Basavaraj and others greeting CM Yediyurappa with sweets.

The bypoll has been necessitated in Sira following the death of JD(S) MLA B Sathyanarayana in August, while R R Nagar seat here fell vacant due to disqualification of the then Congress MLA N Munirathna last year under anti-defection law.

AIMIM workers protest against Maha CM; 'thank' him for 'resolving' woes of Marathwada