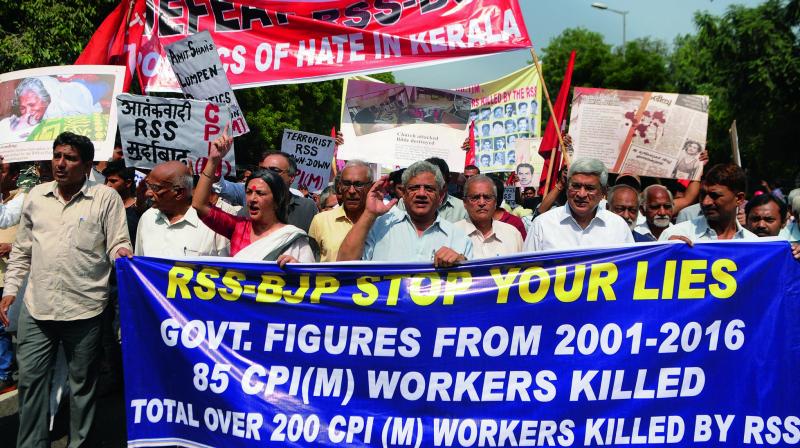 New Delhi: A day after the BJP, it was the CPI(M)’s turn to take to the streets in the national capital over political violence in Kerala with party general secretary Sitaram Yechury asserting that the Left parties were capable of giving a suitable answer if the RSS-BJP did not stop the attacks.

The CPI(M), which had already announced a countrywide protest against the BJP-RSS combine from this day, marched till the BJP headquarters in the capital to protest against alleged saffron terror in Kerala and to counter the ongoing protest marches of the BJP against the alleged violence by the Left.

“We will not keep quite. We warn the BJP that if they do not stop violence then we will answer back. We will not bow down,” Mr Yechury told the media after the march.

Addressing party cadres in front of the BJP headquarters, Mr Yechury said that while the BJP was campaigning in Delhi against the “Left violence” in Kerala there have been continued incidents of violence against the Left cadres.

He said as early as Sunday, RSS workers allegedly threw bombs at Left cadres in Kannur.

Mr Shah was trying to instigate terror against the Left cadres in Kerala, but the people of the state would not bow down in front of the RSS or the BJP, she said.