Modi government has taken landmark steps in past 100 days: Sitharaman 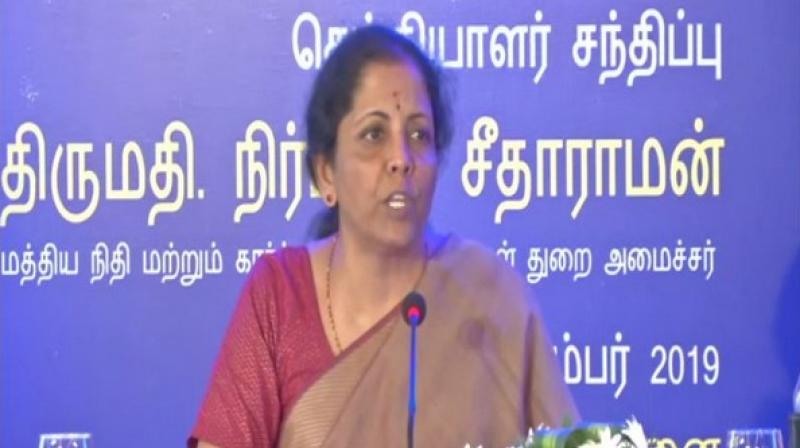 Chennai: Finance Minister Nirmala Sitharaman said on Tuesday the government led by Prime Minister Narendra Modi has taken landmark steps in its second term for India to emerge as a five trillion dollar economy in the next five years amid a domestic and global slowdown.

"I have appointed a high-level task force to identify projects for upgrading infrastructure across the country with an investment of Rs 100 lakh crore. This will include greenfield and brownfield projects costing above Rs 100 crore each," she said.

Listing major achievements of the new government's in first 100 days, Sitharaman said creating a robust infrastructure is imperative for a fast-growing economy like India. The initiative will also generate millions of new jobs.

The government has announced merger of 10 public sector banks (PSBs) into four strong lenders with countrywide networks and global reach to boost credit and revive economic growth, said the minister.

The government had also announced Rs 55,250 crore upfront as a capital infusion in the PSBs.

"The banks will benefit from each other's strength. A growing economy needs good banks. That was the reason behind merging banks. The effective date of mergers will be decided by the respective board of directors," said Sitharaman.

On skidding sales and job losses in the automobile sector, the minister said government departments have been allowed to buy new vehicles. Automobiles purchased till March 31 next year can avail the benefit of additional depreciation of 15 per cent with total depreciation up to 30 per cent.

Besides BS-IV vehicles bought till March 31 next year will remain operational for their entire registration period.

Representatives of major automobile manufacturers have urged Sitharaman to lower the Goods and Services Tax (GST) rate from 28 per cent to 18 per cent. Sitharaman said the GST Council will take a call on the matter.

"I cannot singularly take a decision on GST rate cut on automobiles. The suggestions from automobile sector will be taken into consideration. We are working on this and will soon take a decision," she said.