The parliamentarians raised slogans demanding JPC be formed to probe the purchase of Rafale jet from France. 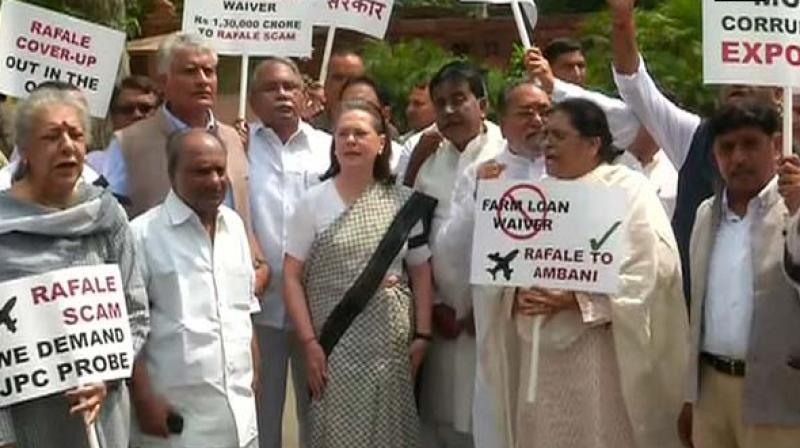 New Delhi: On the last day of the Monsoon Session, opposition parties held protests against the Rafale deal near Gandhi statue in the Parliament premises. UPA chairperson and former Congress chief Sonia Gandhi led the protests and was joined by the top leadership of the party, including Raj Babbar, Ghulam Nabi Azad, Anand Sharma, Ambika Soni, along with several other opposition leaders.

During Rajya Sabha proceedings, Leader of Opposition Ghulam Nabi Azad alleged that the Rafale deal was a "big scam" and there should be a JPC probe into it. Congress Deputy leader Anand Sharma said whenever such issues have been released earlier during previous Congress rules, a JPC probe was ordered and reiterated his party's demand.

The row over Rafale jet deal has remained dominant over the last several months, including the Monsoon Session of the Parliament.

The National Democratic Alliance (NDA) government signed the deal with France-based Dassault Aviation to purchase 36 Rafale jets in 2016. The Congress has time and again cornered the government over the defence pact, alleging irregularities in it and demanding the government to disclose the price of the jets.