Kumaraswamy has no moral right to continue as CM, should step down: Yeddyurappa

‘I requested the Governor to convey to the Speaker that he should take necessary action immediately,’ Yeddyurappa said. 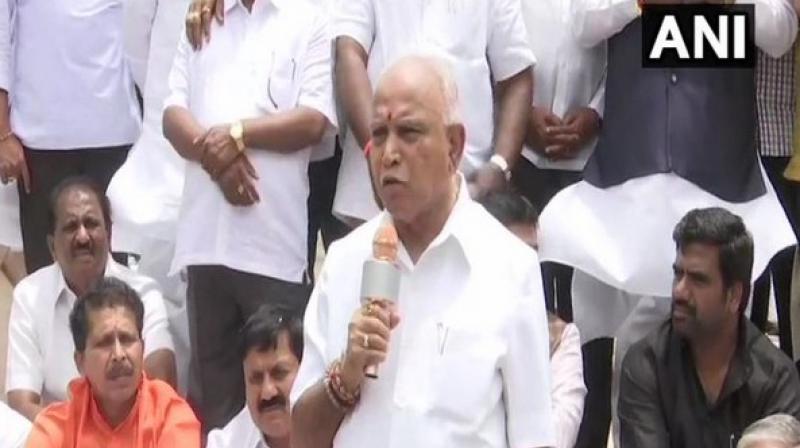 The former chief minister also said that they will meet Speaker Ramesh Kumar at 3 pm on Wednesday. (Photo: ANI)

Bengaluru: Former Karnataka chief minister and Bhartiya Janata Party leader B S Yeddyurappa on Wednesday met Karnataka Governor on Wednesday and said that he had conveyed to him that the Congress-JD(S) coalition doesn't have the required strength in the Assembly.

"I requested the Governor to convey to the Speaker that he should take necessary action immediately. Kumaraswamy has no moral right to continue as Chief Minister as they don't have the numbers," Yeddyurappa said after his meeting.

Earlier today he appealed to Chief Minister H D Kumaraswamy to resign and make way for a BJP government.

"On July 12, the Assembly session will begin but they don't have the numbers, it will be an illegal session. It is not too late, you (HD Kumaraswamy) should resign and make way for a BJP government," said Yeddyurappa.

The former chief minister also said that they will meet Speaker Ramesh Kumar at 3 pm on Wednesday.

Karnataka Legislative Assembly speaker Ramesh Kumar on Wednesday said that he will be present in the office on Wednesday and Bharatiya Janata Party MLA Madhu Swamy has sought time to meet him.

Yeddyurappa sat on dharna along with party cadre in front of Vidhana Soudha to protest the Speaker not accepted the resignations of the Congress-JD(S) MLAs.

On Monday, the Speaker had said that the resignation letters of the eight out of 13 MLAs of the ruling coalition were not in the prescribed format and later asked the legislators to submit them properly.

The 13-month old Congress-JD(S) government slumped into crisis following the resignation of 10 MLAs from the membership of the state Assembly last week.

The Congress-JD(S) coalition is making all efforts to protect its government which seems to have fallen short of a majority.