It is unclear whether Shivakumar and others bore the expenses or it was courtesy gesture by Renaissance Mumbai Convention Centre Hotel. 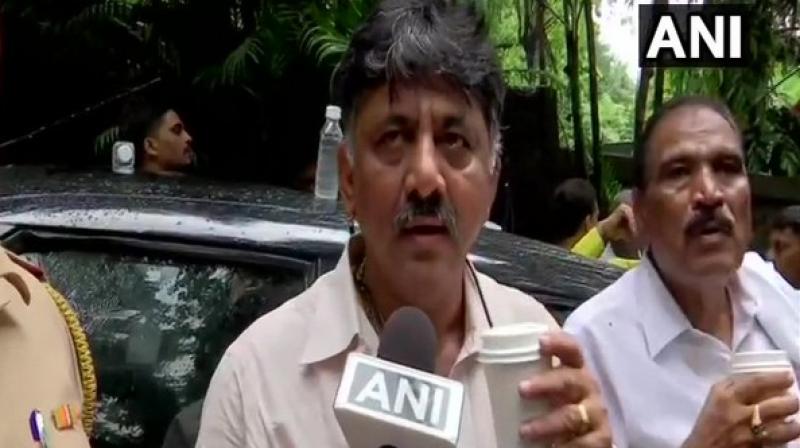 The rebel MLAs had checked into Mumbai's Sofitel Hotel on Saturday and later moved to the Renaissance Hotel in the city on Monday. (Photo: ANI)

Mumbai: Karnataka Congress Minister DK Shivakumar, who had to wait under a tree for over three hours, was treated with hospitality by the hotel where rebel MLAs are lodged, despite the inn cancelling his booking.

Shivakumar, who in a bid to pacify dissidents reached Mumbai this morning, was served tea, coffee and doughnuts by the hotel staff on regular intervals. Those accompanying him, media and police personnel were also offered food.

The Congress leader was sipping a hot beverage while talking to ANI as he camped outside the hotel waiting for rebel legislators to meet him.

Though it is unclear whether Shivakumar and others bore the expenses or it was a courtesy gesture by Renaissance Mumbai Convention Centre Hotel.

This morning, the cancelled the Congress leaders booking citing "some emergency". In response, the Congressman said he loves the facility and they should be proud of a customer like him.

The 10 dissident MLAs of Congress and JDS are currently staying at the facility, however, they have expressed their wish to not meet Shivakumar.

The Congress has been accusing the BJP of conspiring to topple Congress-JD(S) coalition government in Karnataka. The ruling allaince is making all efforts to protect its government which seems to have fallen short of a majority.

The rebel MLAs had checked into Mumbai's Sofitel Hotel on Saturday and later moved to the Renaissance Hotel in the city on Monday.

The 13-month old Congress-JD(S) government slumped into crisis following the resignation of 10 MLAs from the membership of the state Assembly last week. Congress' Roshan Baig and independent H Nagesh have also deserted the HD Kumaraswamy government.

However, Defence Minister Rajnath Singh, in his reply in Parliament, asserted that his party is committed to parliamentary democracy and has no relation with the developments in Karnataka.