As political analysts raise eyebrows over Kumar-Modi bonhomie, the Bihar CM is toughening his stand against so called ‘secular’ Opposition parties. 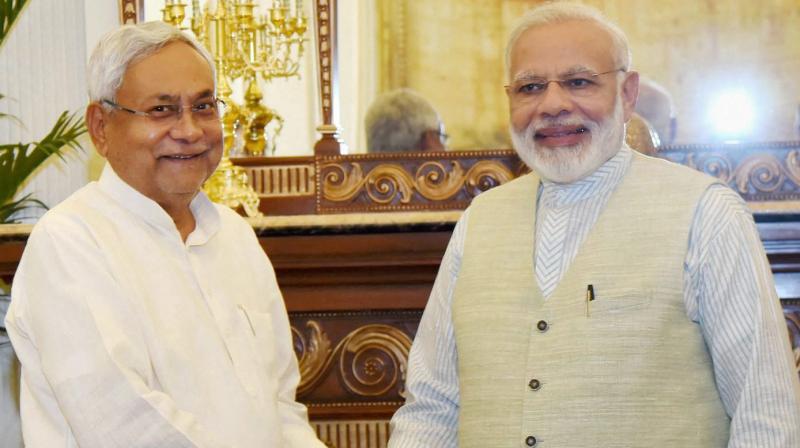 Patna: There are no untouchables in politics. And who better than Bihar chief minister Nitish Kumar can preach this as he cosies up to his “once-untouchable’’ foe-turned-friend and Prime Minister Narendra Modi.

Gone are the days when Mr Kumar scoffed at Mr Modi’s “communal” image. The Bihar chief minister has now developed a liking for all things with a Modi stamp and is open to put his weight behind RSS soldiers, including Mr Modi and NDA’s presidential candidate Ram Nath Kovind.

The canny politician in Mr Kumar has managed to dictate the time and issue on which he wants to distance himself from other Opposition parties.

The JD(U) leader has shown the flexibility in his ideology to romance both the NDA and the UPA, cautiously maintaining a clean image and zero tolerance for anyone with the slightest of taint – even if that happens to be his own alliance partner and RJD chief Lalu Prasad Yadav.

The tallest proponent of  “Opposition unity” has delivered the biggest blow to the fledgling “secular alliance” in central politics by distancing himself from it and backing NDA’s presidential candidate and state governor R.N. Kovind.

For leaders in the Bihar coalition, some of Mr Kumar’s positions are confusing.  They say that he had himself initiated the move to unite the Opposition parties against the ruling BJP for the presidential election but broke ranks and at an opportune moment backed Mr Kovind. 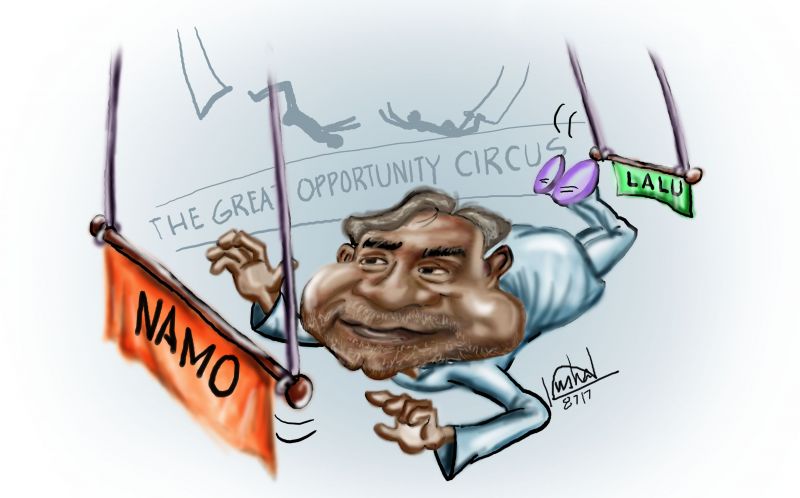 Even after the CBI registered an FIR against RJD chief and his son and Bihar deputy chief minister Tejashwi Yadav in an alleged land scam, Mr Kumar kept himself away from Patna and avoided airing any reaction. This was a strong statement from Mr Kumar for keeping himself “clean”.

Publicly, Mr Kumar has clarified that he is not dreaming of becoming Prime Minister. But people close to him admit that Mr Kumar realises his potential to have the coveted “7, Lok Kalyan Marg, New Delhi” address on his official visiting card.

Mr Kumar is often referred to as “Chanakya of Bihar politics” and he lived up to this reputation when he, surprisingly, sank political differences and joined hands in 2015 with arch-rival and RJD chief Lalu Yadav to return as the chief minister for the third consecutive term after being badly bruised in 2014 Lok Sabha polls.

For the first time since he broke ties with the BJP in 2013, walking out of the NDA after 17 years on the grounds that Mr Modi was declared as PM candidate by the BJP, Mr Kumar seems to be flirting with Mr Modi again.

He is the product of the “JP Movement” and was initially with the Janata Dal which defeated Rajiv Gandhi in 1989. When the Janata Dal broke into many groups, he sided with Lalu Yadav, George Fernandes, Sharad Yadav and Ram Vilas Paswan.

It was at this time that he, along with Mr Fernandes and others, formed the Samata Party and extended his support to the BJP and then became a union minister in the Atal Behari Vajpayee government.

Despite Gujarat riots in 2002, he didn’t leave the NDA and this helped him in becoming the Bihar chief minister with the support of BJP in 2005.

An electrical engineer from National Institute of Technology, Patna, then known as Bihar College of Engineering, Mr Kumar entered the state Assembly for the first time in 1985.

Mr Kumar became an MP from Barh constituency in 1989 and was appointed minister of state for agriculture in the Vajpayee government. Till 2004, he served as railway minister twice.

The Godhra train incident in February 2002, which led to a major communal riot, had occurred during his tenure as railway minister. As political analysts raise eyebrows over Mr Kumar and Mr Modi’s growing bonhomie, the Bihar CM has started toughening his stand against the so-called “secular” Opposition parties.

During a state committee meeting of his party recently, he had categorically said that “he cannot be a follower of any party” — a veiled reference to the Congress Party’s attempt to dominate agenda of the Opposition parties.

By indicating his willingness to back the UPA candidate for V-P’s post, he proved right the political analysts who believe “he keeps both the BJP and Congress in good humour for his future political ambitions”.

The outcome of the presidential poll is foregone conclusion but the real hero of the test of strength on July 17 will not be Mr Modi but Mr Kumar, who has learnt to wear his “kingmaker” batch without pretensions.