Siddaramaiah also charged the BJP and the JD(S) with working together in Chamundeswari constituency to defeat him. 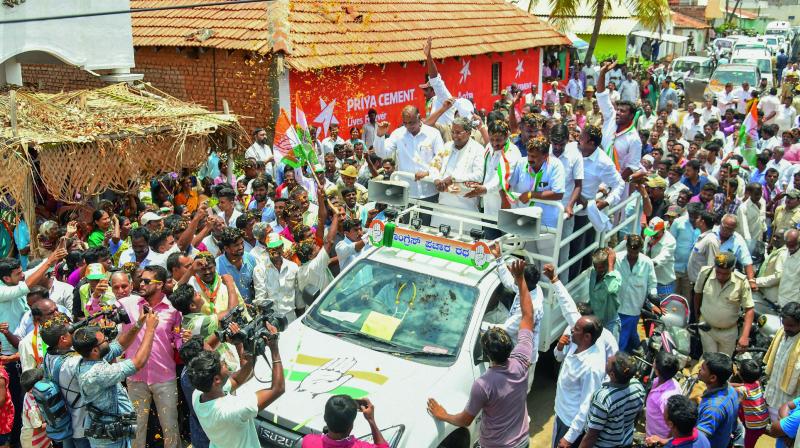 Karnataka CM Siddharamaiah during a roadshow at Chamundeshwari in Mysuru. (Photo: PTI)

Mysuru: Every political party worth its salt may be clamouring to placate the dalitsby going overboard to fulfill their demands, but when it comes to the CM post in Karnataka, dislodging the incumbent, Mr Siddaramaiah, could prove a bit too difficult.

On the sticky issue of whether the clamour for a dalit CM raised by PM Modi would see the Congress replace him with a dalit CM, Mr Siddaramaiah, in an interview with this newspaper,  said, “Why is there still a debate about the next CM? Let me clarify to you that there is no race among the dalit Congress leaders in this regard. Our party leader in Lok Sabha is Mallikarjun Kharge, and he has already clarified that he is not a contender for the CM gaddi. Kharge himself made a statement in Afzalpur, where I was present on the dais. He said, “Siddaramaiah will be the next CM”.

“The BJP which is raising the bogey of the dalit CM should declare its senior leader Govind Karjol as it’s CM candidate. Since the Assembly elections are being fought under my leadership, naturally I am the best choice for the CM post.”

Asked if that meant that dalits will have to wait for another five years to see one of them become CM, he said “Yes, if I am made the CM.”

Mr Siddaramaiah also charged the BJP and the JD(S) with working together in Chamundeswari constituency to defeat him. As he wound down his gruelling campaign in Nanjangud and Chamundeswari, the CM said on Tuesday that his opponent JD(S) candidate G.T. Deve Gowda had all but admitted to it.

“Look at the candidates fielded in Mysuru district, look at the candidates the BJP has put up in Chamundeswari, in K. R. Nagar, in Hunsur, in Periyapatna, in Varuna. In all these constituencies, the BJP has fielded weak candidates. The JD(S) candidate in Chamundeswari G.T. Deve Gowda admitted it when he said that wherever the BJP puts up a strong candidate, the JD(S) would field a weak candidate and wherever the JD(S) puts up a strong candidate, the BJP would do the same,” the CM said.

Dismissing any notion of a hung assembly, he exuded confidence that he would pull in 124 seats or more in the Assembly polls on May 12.

He said it wouldn’t stop there. “The victory of the Congress in Karnataka will be a stepping stone for the coming Parliament election. Before that happens, elections are approaching in Madhya Pradesh and Rajasthan. The BJP will be defeated in both these places after the Karnataka election. According to me, it’s a definite win for the Congress,” he said.

As for the BJP’s prospects in Karnataka, he said, “In eight districts, there is no BJP MLA. Chamarajnagar, Mandya, Hassan, Ramanagara, Bengaluru Rural, Kolar, Chikkaballapur — where are the BJP MLAs? How can they come to power when the BJP is absolutely zero in eight districts.”

“The JD(S) isn’t too different: they don’t have MLAs in Kalaburgi, Ballari, Vijayapura, Belagavi. They have no presence here,” he added.