The party received a clear mandate and caused some serious damage to the outgoing Congress’s seat toll. 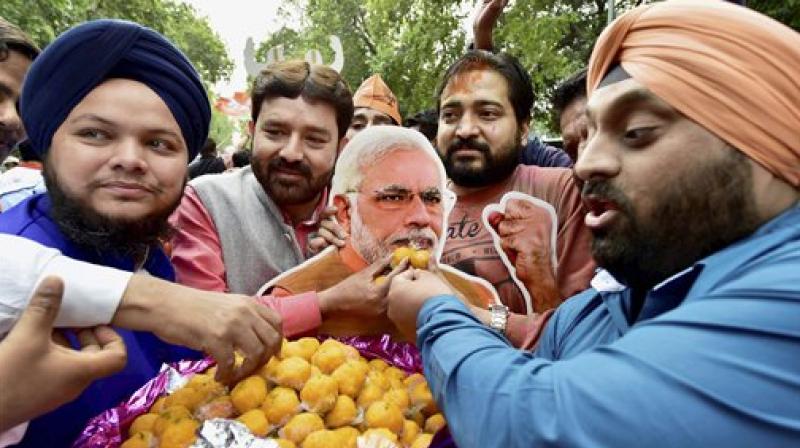 BJP supporters and workers offer sweets to a cut out of Prime Minister Narendra Modi as they celebrate party’s victory in the assembly elections, at the party head quarters in New Delhi. (Photo: PTI)

Dehradun: It was an easy run for the Bharatiya Janata Party to the victory stand, as it dislodged the conflict-ridden Congress government by securing 57 out of 70 seats in the state.

Riding steadily on an anti-incumbency wave, the BJP managed a clean sweep and even surpassed the exit poll figures, despite facing several internal conflicts before polls.

In an extension of the support it received during the 2014 Lok Sabha election, the party received a clear mandate and caused some serious damage to the outgoing Congress’s seat toll.

Commenting on the massive win, Prime Minster Narendra Modi said “Victory in Uttarakhand is special; I assure people of the state that BJP will serve them with dedication,” in a tweet.

Union Home Minister Rajnath Singh had remarked, "This is a big victory. BJP has reached new heights in Uttarkhand and Uttar Pradesh and has changed the political picture of the country."

BJP spokesman Munna Singh Chauhan attributed Rawat's defeat to thriving corruption and a strong anti-incumbency factor. “People were totally disillusioned with the Rawat government under whom corruption flourished like never before and they were desperately looking for change," Chauhan pointed out.

He further added, "Narendra Modi's style of leadership, his head-on approach towards corruption inspired confidence among the masses who voted overwhelmingly in favour of the BJP for a clean and accountable government."

In a major blow to the Congress, outgoing Chief Minster had Chief Minister Harish Rawat lost to Bharatiya Janata Party candidates in both seats he contested from -- Haridwar Rural and Kichha.

Rawat also tendered his resignation hours after his defeat.

The outgoing chief minister garnered 32,645 votes in Haridwar Rural, losing the seat to BJP's Yatishwaranand by a margin of 12,227 votes. In Kichha, the Congress leader lost to BJP's Rajesh Shukla by 2,154 votes.

“I accept Congress’ defeat. There must have been some shortcomings in my leadership that led to the party’s defeat,” he said.

On the other hand, Uttarakhand BJP president Ajay Bhatt lost to Karan Mahara of Congress by 4981 votes from Ranikhet.

The grand old party which faced several defections in the recent past, ran a lacklustre campaign in the state that had reflected in the numbers. With only Rawat and a few other leaders to garner public attention, the party failed to create any excitement amidst voters leading to the humungous upset.

On the other hand, the BJP which also saw internal seat-sharing conflicts managed to capitalise the charisma of Narendra Modi to get its act together. With no chief ministerial candidate, the prime minister had to pull the party through with his rallies and speeches.

A majority of exit polls had predicted that the Bharatiya Janata Party will wrest power from Congress. The party had been pegged to bag around 40-50 seats by India Today and Chanakya exit polls. However, C-Voter had predicted a tie between the two parties.

Voting was held in all 70 constituencies of the state. The state saw a voter turnout of 65.64% with 637 candidates in the fray.

In 2012, the BJP tried to cash in on former chief minister BC Khanduri’s clean image but bagged 31 of the 70 seats putting Congress in the driver’s seat. The Grand Old Party had emerged as the single largest party with 32 seats and 33.79% vote share, the BJP lost with a very small margin and got 33.13% vote share.

The BSP could only win in three seats of the 70 it contested, with 12.19 vote share.

In the 2014 general elections, BJP cast its spell on Uttarakhand and won all five seats form the state with 55.30% vote share.