Captain Amarinder Singh won from Patiala urban seat by a huge margin of over 51000 votes. 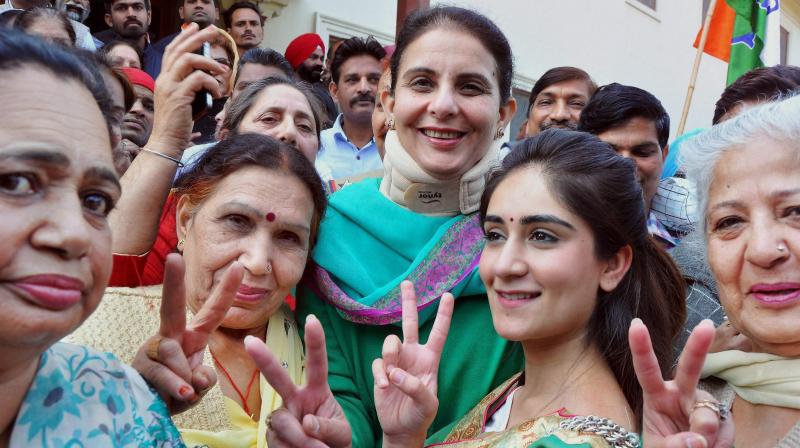 Chandigarh: Captain Amarinder Singh steered Congress to power in Punjab, as the state failed to buck the trend and continued with the tradition of altering governments between Congress and SAD. The Congress tasted clear victory by securing 77 out of 117 seats.

Captain Amarinder Singh, who turned 75 on Saturday, couldn't have asked for a better birthday gift. He won the Patiala urban seat by a huge margin of over 52,407 votes. Amarinder also recorded the highest winning margin in the state and bettered his margin of 42,318 secured in 2012 Assembly polls.

"We hope Union Government will recognise demands of Punjab and assist us," he said after his win.

"Drugs menace in the state will be my first priority as far as governance is concerned. As far as development is concerned, health and education will be my priority. Arvind Kejriwal's Aam Aadmi Party is like summer storm which has come and gone without making any difference," he added.

The anti-incumbency wave proved to be fatal for the SAD-BJP combine, which finished third in the race with 19 seats to their credit. The drug menace was one of the biggest poll issues in the state and repeated seizures of illegal drugs in the state caused a dent in the Akali Dal’s image.

AAP, which was tipped to be the dark horse, could not come anywhere close to the victory it dreamed of, but its foray into the political arena in Punjab further scuttled the chances of the Akalis. It secured victory in 22 seats.

Disappointed by its performance, AAP leaders said that they would review what went wrong. "We are disappointed with the results. We will introspect on the reasons behind the (poor) performance," senior AAP leader Ashutosh said.

Cricketer-turned-politician Navjot Singh Sidhu, who kept everybody in suspense about which side he would bat for, emerged as one of the biggest beneficiary, as his decision to join the Congress paid off.

“Kejriwal lost the polls because his intentions were not right. This is not just the victory of Rahul Gandhi, Priyanka Gandhi, but the victory of every Congress worker. It’s my promise, that we will make Punjab an example of good governance,” Sidhu told the media.

Let us take a look at the exit poll predictions:

Today’s Chanakya predicted a tie between Congress and AAP by projecting 54 seats for both the parties.

Similarly News X-MRC predicted a tie between Congress and AAP by indicating that they’ll get 55 seats each.

India TV C-Voter put its money on AAP by giving the party 59-67 seats, while projecting 41-49 seats for the Congress.

The Shiromani Akali Dal-BJP combine came to power in in 2012 for the second term, winning 68 of the 117 seats. The total vote share of the combine was around 42 per cent.

The Congress won 46 seats with a vote share of nearly 40 per cent, while Independents got 3.