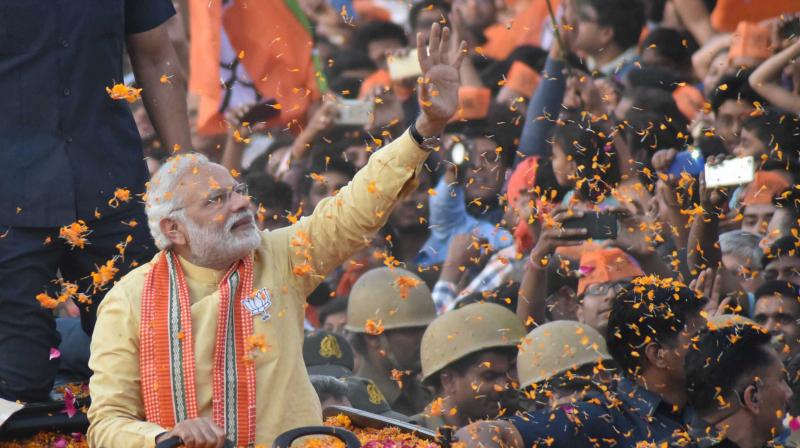 New Delhi: Prime Minister Narendra Modi decimated the Opposition in Uttar Pradesh Saturday, leading his party to an unprecedented absolute majority in the country’s most populous state, also considered the ‘jewel in the crown’ of all India’s political prizes.

The Bharatiya Janata Party (BJP) and allies swept aside the Samajwadi Party-Congress alliance and also the other traditional regional party – Mayawati’s Bahujan Samaj Party – to emerge with 325 seats in the 403-constituency Assembly. The SP-Congress alliance managed 54 while Mayawati got 19. The Congress, which fought on 105 seats, got only 7.

The BJP was also set to form the government in Uttarakhand, winning another absolute majority over the incumbent Congress which was racked by infighting while in governance last term. The BJP won 57 of the state's 70 seats. The ruling Congress has managed 11.

The BJP came a close second in the Congress' traditional bastion, Manipur -- 21 to Congress' 28. Manipur has delivered a hung Assembly. Congress' three-term Chief Minister Okram Ibobi Singh defeated political debutante and activist Irom Sharmila. Sharmila got less than votes. The Congress' quest for a fourth term in power looks bleak in Manipur if BJP can pull in a few allies.

Congress handsomely won Punjab, where it defeated the incumbent SAD-BJP coalition that has ruled the state for ten years. Surprisingly, and belying expectations, Arvind Kejriwal's Aam Aadmi Party was not doing too well, coming a poor second to the Congress. The Congress got 77 of the state's 117 seats, AAP 20 and SAD-BJP 18.

Goa too is hung. The Congress has emerged as the single largest party with 17 seats. AAP was not able to open its account in the state. BJP chief Amit Shah, however, was confident that the party would form a government in Goa with its 13 seats.

Amit Shah told the media Saturday evening that Uttar Pradesh’s phenomenal win was a vote for the ‘politics of performance’ which has effectively silenced the 'politics of casteism, appeasement and dynasty'.

He announced the BJP had done extremely well in the traditional Nehru-Gandhi bastions of Amethi and Rae Bareilly parliamentary constituencies by picking up 6 of the 10 Assembly seats here. “We had not done well in 2014,” Shah said.

Shah was confident that the BJP would form governments in close-call states Manipur and Goa too.

Hailing Narendra Modi as the ‘most popular leader since Independence’, Shah said the people voted for Modi because he had come good on his 2014 poll promises and established himself as a pro-poor leader.

Shah also said the five-state mandate today was a tight slap on the face of the Opposition that ran a smear campaign against Modi.

Outgoing Chief Minister Akhilesh Yadav did not mince words when he said the people of Uttar Pradesh had been misled by the BJP. “I built expressways, perhaps the people wanted bullet trains,” Akhilesh said.

“I waived Rs 1600 crore of farmers’ loans. I expect the next government to waive loans of all farmers in India,” he added. Akhilesh maintained that he did not regret the coalition with the Congress. “Two young leaders went out to the people and it was a good thing,” he said.

In Uttar Pradesh, the Samajwadi Party dug its own grave last year in the middle of an intense power struggle with party patriarch Mulayam Singh Yadav and brother Shivpal on one side and son and chief minister Akhilesh Yadav and cousin Ramgopal on the other.

The two factions sacked each other from party posts in a free-for-all earlier this year, even fighting for the party symbolm before Akhilesh decided to tie up with the Congress to thwart a resurgent BJP. That obviously did not go down too well with the grassroots as the results now show.

There have been loud grumblings from SP leaders that Congress candidates had contested against the Samajwadi Party in certain constituencies paving the way for the BJP to take advantage of the vote divide. Party leaders have said the alliance may have helped the Congress but it certainly did not do anything for the SP.

Rahul Gandhi seems to have failed to make any impact for his party in Uttar Pradesh in the Hindi heartland, with his party leading in only nine UP constituencies.

A good show by the BJP in Uttar Pradesh is being seen as a reaffirmation of Prime Minister Narendra Modi's standing among the masses and popular endorsement of his agenda, especially demonetisation.

This victory will also boost BJP president Amit Shah's authority as capturing power in Uttar Pradesh has been a dream project for the party after it was reduced to the margins of the state's politics that it ruled for much of the 1990s.

Shah has been seen as the architect of the party's outreach to various social groups, mostly OBCs and sections of Dalits.

This big BJP win will also boost its strength in the Rajya Sabha where the Congress-led opposition has been able to block the government's legislative agenda due to its numerical superiority.

"The BJP has reached new heights in Uttarakhand and Uttar Pradesh states and changed the political picture of the country," Union Home Minister Rajnath Singh said amid scenes of jubilation at party offices in the state. The party would be returning to power in the state after 14 years.

The Congress, on the other hand, has sought to insulate party vice president Rahul Gandhi from any negative fallout saying poll results are never a referendum on any single individual. Congress’ Sandeep Dikshit said that "it would be unfair to blame the party's debacle entirely on Rahul Gandhi."

The most riveting contest was in Uttar Pradesh, which is seen as a gamechanger and a virtual referendum on Prime Minister Narendra Modi's popularity and his reforms agenda.

In 2012, the Samajwadi Party swept to power defeating incumbent chief minister Mayawati’s Bahujan Samaj Party which had got an absolute majority in the previous elections.

Congress was confident of wresting power in Punjab. All exit polls predicted a wipeout for the ruling Akali Dal-BJP alliance and contest is seen between the Congress and the Arvind Kejriwal's Aam Aadmi Party.

Votes were counted at 54 centres in 27 locations set up for election to 117-member Punjab Assembly.

The Shiromani Akali Dal-BJP combine came to power in Punjab in 2012 for the second term, winning 68 of the 117 seats. The total vote share of the combine was around 42 per cent.

The Congress won 46 seats with a vote share of nearly 40 per cent, while Independents got 3.

In Goa, votes were counted at two centres in North and South Goa to declare the winners in 40 seats.

In 2012, the BJP-Maharashtrawadi Gomantak had defeated incumbent Congress-led by Chief Minister Digambar Kamat, getting 24 of Goa’s 40 seats. The BJP won 21 seats. Between the two, they lapped up a vote share of 41 per cent.

In 2014, the BJP picked up both Lok Sabha seats in Goa – taking one away from the Congress.

A total of 637 candidates including 56 contested for 70 seats in the Uttarakhand Assembly. 15 counting centres were established in Uttarakhand where the Assembly strength is 70.

In 2012, the BJP tried to cash in on former chief minister BC Khanduri’s clean image but bagged only 31 of the 70 seats putting Congress in the driver’s seat. The Grand Old Party had emerged as the single largest party with 32 seats and 33.79% vote share, but the BJP lost with a very small margin and got 33.13% vote share.

The BSP could only win in three seats of the 70 it contested, with 12.19 vote share.

In the 2014 general elections, BJP cast its spell on Uttarakhand and won all five seats form the state with 55.30% vote share.

In Manipur, counting of votes were held for 60 seats. Congress’ Okram Ibobi Singh has ruled in Manipur for 15 years. One of the major challenges for Congress this year was thought to be Irom Sharmila’s People’s Resurgence Justice Alliance.

Congress emerged as the lone giant in 2012 Manipur Assembly polls and achieved a hat-trick win by securing 42 of the 60 seats in the state. It was sweet victory for Chief Minister Okram Ibobi Singh as the party got 42.42 vote share.

The All India Trinamool Congress came second with 7 seats and 17% vote share. BJP could not make a mark in the state and did not win a single seat.

In the 2014 general elections too, Congress reigned supreme and won both the seats in Manipur.