Sharing the voting data, Singh said Saturday’s turnout was five per cent less than the earlier Assembly elections in 2015. 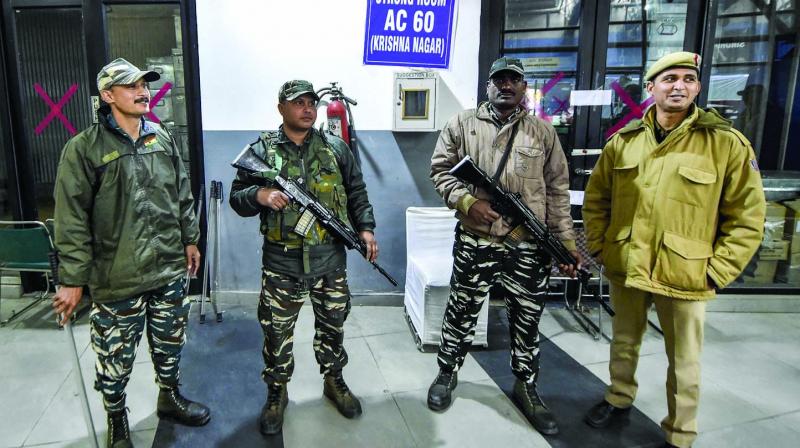 Security personnel stand guard outside a strongroom at a counting centre in Akshardham, New Delhi, on Sunday. (Photo: PTI)

New Delhi: Exactly 25 hours after the polling deadline ended, the Election Commission announced on Sunday that 62.59 per cent of the 1.47 crore total voters of Delhi had exercised their franchise for the 70-member Assembly. Though the deadline was 6 pm, the polling went on till 11 pm on Saturday in about 100-odd booths where voters had already gained entry before the stipulated time.

Questioning the inordinate “delay” in releasing the poll data, chief minister Arvind Kejriwal said it was “absolutely shocking” that the EC had not come out with the figure several hours after the voting got over. The ruling Aam Aadmi Party also raised serious questions on the security of the electronic voting machines, alleging that attempts were being made to tamper with these machines to “influence” the poll outcome.

A senior EC official, however, made it clear all EVMs used for the polls had been sealed in front of party agents and brought to the strongrooms directly from the polling stations. He said a multi-layer security system with 24x7 CCTV surveillance was put in place at the counting centers for the safety of the voting machines.

Many BJP leaders are optimistic that a majority of the voters who voted after 5 pm were their party supporters and could easily tilt the poll outcome in their favour. A BJP candidate contesting from a East Delhi constituency said the party was able to win 32 seats with its ally, the Shiromani Akali Dal, by securing 34.1 per cent votes in the 2013 Assembly polls. But the saffron party was down to just three seats after its voteshare fell by just 0.9 per cent in the 2015 Assembly elections.

Delhi’s chief electoral officer Ranbir Singh Singh said that there was “no unusual delay” in announcing the final voter turnout figure as the returning officers were busy with the scrutiny of data throughout the night to ensure its accuracy.

Sharing the voting data, Mr Singh said Saturday’s turnout was five per cent less than the earlier Assembly elections in 2015.  He said the highest voting of 71.6 per cent was
reported from Ballimaran constituency, while the lowest was in Delhi Cantonment, that reported 45.4 per cent polling.

Before the poll body announced the voter turnout, Mr Kejriwal tweeted: “Absolutely shocking. What is EC doing? Why are they not releasing poll turnout figures, several hours after polling?”

AAP Rajya Sabha MP Sanjay Singh went a step further, alleging that “something is cooking” and “a game is being played secretly”. He said: “This is perhaps the first time in the 70-year-history of country that the Election Commission is not ready to release the final figure of voter turnout.”

Mr Singh also tweeted a couple of videos, saying voting machines were being taken away illegally. “Does the reserve (forces) not go with the EVM? This official was caught with an EVM by people at Saraswati Vidya Niketan School in Babarpur Assembly constituency,” read the tweet with one of the videos.The other, which showed voting machines being carried across a street, read: “The EC should also probe where these EVMs are being taken. There are no centres nearby.”

The exit polls on Saturday had predicted an easy win for the AAP, which sought to retain power on a development plank, against the BJP that ran an aggressive campaign on the issues of anti-CAA protests and nationalism.

BJP leaders, however, said the exit poll results will “fail” as they did not take into account the votes polled in the evening. A BJP leader said voting had continued beyond the stipulated time of 6 pm while exit poll results started coming just after that. “How can it be representative?” he asked.

Also, the BJP leader said, the voting was “sluggish” in the initial hours and picked up only in the late afternoon when BJP workers actively urged voters to reach polling stations. About 15 per cent of voters had turned up in the first three hours of voting. By 3 pm, the voter turnout had touched only the 30 per cent mark.