If the ruling BJP cruises to majority, Yediyurappa would still face a tough task of cabinet expansion. 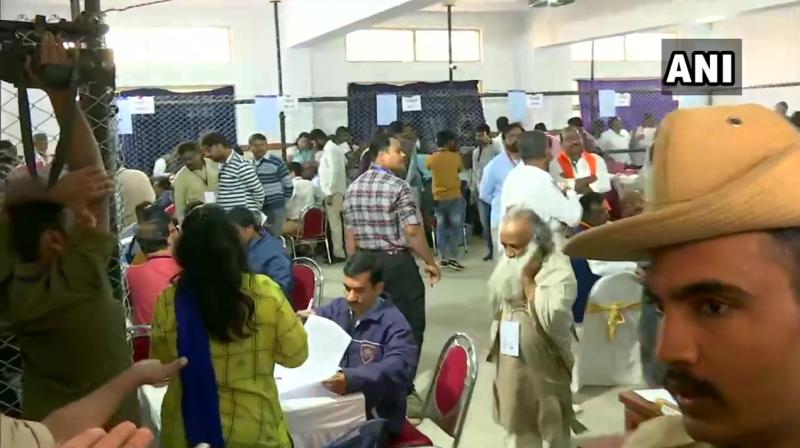 The counting of votes for the by-elections on 15 assembly seats in Karnataka that went to polls on December 5 is underway at 11 centres in the state. (Photo: Twitter/ ANI)

Bengaluru: Karnataka Chief Minister B S Yediyurappa celebrates with his son B Y Vijayendra as BJP leads on 12 out of 15 seats in Assembly constituencies that went for bypolls on December five, as the counting of votes was taken up on Monday, election officials said.

As the votes are being counted, the initial trends showed the Congress as the loser in the Karnataka bypolls on Monday.

Congress leader DK Shivakumar said, “We have to agree with the mandate of the voters of these 15 constituencies. People have accepted the defectors. We have accepted defeat. I don't think we have to be disheartened.”

Initial trends showed the Congress and JD(S) were ahead in two seats, while independent candidate was maintaining lead in Hoskote.

The bypolls were held to fill vacancies caused by the disqualification of 17 rebel Congress and JD(S) MLAs, whose revolt led to collapse of the H D Kumaraswamy-led coalition government in July and paved the way for BJP to come to power.

The BJP needs to win at least six of the 15 seats to remain in majority in the 225-member Assembly including the Speaker, who has a casting vote), which would still have two vacant seats -- Maski and R R Nagar.

In the Assembly with the current strength of 208 after disqualifications, the BJP has 105 MLAs (including an independent), the Congress 66 and the JD(S) has 34 MLAs. There is also one BSP member, a nominated member and the Speaker.