A Dalit icon, Paswan always read writing on the wall

LJP wanted to write about the historyt of socialist politics 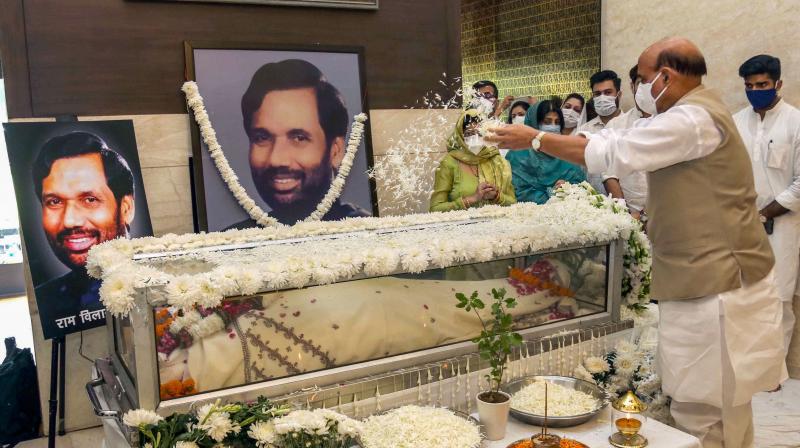 Ram Vilas Paswan, Union minister and founder of the Lok Janshakti Party (LJP), died on Thursday at a Delhi hospital where he was recuperating from heart surgery.

On Thursday evening, his 37-year-old son, Chirag Paswan, posted the news of his death on social media.

"Papa... Now you are not in this world but I know you are always with me wherever you are. Miss you Papa," he tweeted and shared a throwback photograph with his father.

The 74-year-old Dalit leader was already in hospital when his son Chirag decided to leave the NDA ahead of the Bihar Assembly polls. We will never find out whether junior Paswan’s decision had the approval of his father who was often referred to as a “Mausam Vigyanik” because he could foresee winds of change and often managed to stay with the winning side.

For, had the socialist leader vetted his son’s decision, we would have known which side the wind is blowing in Bihar Assembly polls.

Paying tribute to him, Prime Minister Narendra Modi tweeted, "Ram Vilas PaswanJi rose in politics through hardwork and determination. As a young leader, he resisted tyranny and the assault on our democracy during the Emergency."

Ram Vilas Paswan, who was Union minister for food and consumer affairs in Narendra Modi’s Cabinet, was considered to be one of the smartest politicians who, along with Sharad Yadav and Lalu Prasad, emerged as the young socialist brigade of Bihar out of Jayaprakash Nayaran’s movement.

Born in Khagaria, Bihar, in 1946, he was first elected to the Bihar state legislative Assembly in 1969 as a member of the Samyukta Socialist Party from a reserved constituency. In 1974, he became the general secretary of the Lok Dal.

He was personally close to the prominent anti-Emergency leaders like Raj Narain, Karpoori Thakur and Satyendra Narayan Sinha. He parted ways with Morarji Desai and joined Janata Party-S led by Lokbandhu Raj Narain as party's president and later as its chairman.

Paswan spent the entire period of Emergency, beginning 1975, in jail. When he was released in 1977, the Dalit leader became a member of the Janata Party and won a Lok Sabha election with the largest margin ever -- 4.24 lakh votes.

What can also, perhaps, make it to the world record is the fact that he has been a Union minister in almost all the governments since then.

Paswan was re-elected to the 7th Lok Sabha in 1980 and 1984 from Hajipur constituency. In 1983, he established the Dalit Sena, an organisation for Dalit emancipation and welfare. It was from this juncture that he modelled himself as a Dalit face.

He was instrumental in the implementation of the Mandal Commission report in the 1990s.

The Dalit Sena was later headed by his brother Ram Chandra Paswan, who passed away a couple of years before.

Paswan was re-elected to the 9th Lok Sabha in 1989 and was appointed Union minister of labour and welfare in the Vishwanath Pratap Singh government. In 1996, he even led the ruling alliance or Proposition in the Lok Sabha as the Prime Minister was a member of the Rajya Sabha. This was also the year when Paswan first became the Union railway minister. He continued to hold that post till 1998. Thereafter, he was the Union communications minister from October 1999 to September 2001 when he was shifted to the coal ministry, a portfolio he held till April 2002.

In 2000, Paswan broke from the Janata Dal, to form the Lok Janshakti Party (LJP). Following the 2004 Lok Sabha elections, he joined the United Progressive Alliance (UPA) government and was made the Union minister heading the chemicals and fertilizers and steel ministries.

But with Narendra Modi’s advent in 2014, he was quick to read the writing on the wall and joined the NDA, becoming Union minister for food and consumer affairs.

However, before the 2019 general elections, Ram Vilas Paswan handed over the baton of his party to son Chirag and devoted himself just to the ministry.

In Delhi, his official residence, 12 Janpath, which he retained most of his life, was an open House for party workers and journalists.

An old school politician, Paswan maintained a personal relationship with the media. Rarely would a call or request for an interview go unanswered.

Many times reporters would sit late in his drawing room with Paswan sharing political anecdotes from his over four-decade long career.

In a recent interaction with this correspondent, Paswan expressed interest in writing about the history of socialist politics in India.

Despite changing sides due to political exigencies, he maintained a good, personal rapport with most politicians. He never failed to send birthday greetings to his long-time next door neighbour, Sonia Gandhi.

With Paswan's death passed that era of India’s politics when politicians were tolerant, connected with the grassroots and remained modest, accessible even when in power.

It remains to be seen whether Chirag Paswan can keep his father’s legacy alive.