Kumar Vishwas has been noticed frequently meeting political leaders from other parties. 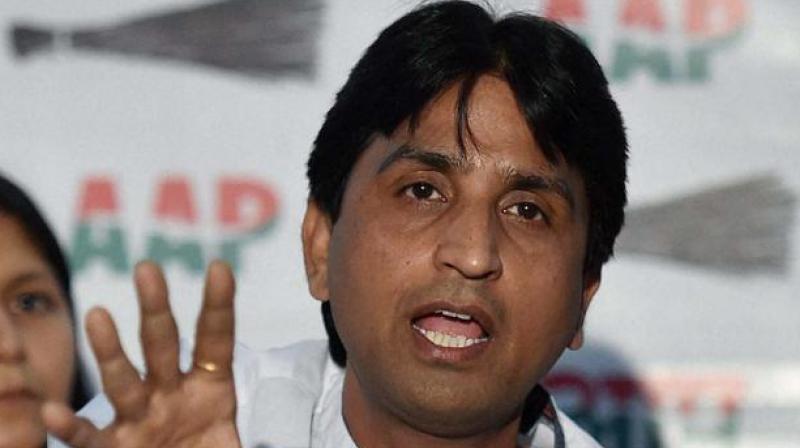 Jaipur: Is Aam Aadmi Party (AAP) so desperate to expand its base in Rajasthan that it is ready even to join hands with the so-called “discarded” leaders of Congress and BJP?

AAP's Rajasthan in-charge Dr Kumar Vishwas has been noticed frequently meeting political leaders from other parties. On Wednesday, he met Sumitra Singh, the former Speaker of Rajasthan, at her residence. Earlier, on Monday, he met farmer leader Rampal Jat.

Both leaders were in the BJP at one time and belonged to the influential Jat community.

During her first tenure as chief minister, Vasundhara Raje had appointed Ms Singh as Speaker, while Mr Jat was the party's general secretary.

While Mr Jat is active with farmers' agitations, Ms Singh, a nine-time MLA from?, is now a spent force. She has lost consecutive elections. The last election she fought as an Independent and came a paltry third. Another problem with her is her fetish for frequently changing parties. Ms Singh has been with almost every political party, except Communists.

While the BJP also adopted this strategy before 2014 Lok Sabha polls and later in every state that went to polls. But the difference was that unlike AAP, which is knocking the doors of leaders past their prime, it took only those leaders who were political heavyweights.

The other leaders, Dr Vishwas tried to meet are senior BJP leader Ghanshyam Tiwari and Independent MLA Hanuman Beniwal, but both were out of town.

However, he met Pooja Chhabra, the daughter-in-law of former Janata Party MLA Gurusharan Chhabra, who died while fasting for a liquor ban in Rajasthan. Ms Chhabra has also been hunting for a right political platform.

So far, the AAP has refrained from poaching leaders from other political parties particularly, the BJP and Congress. How could a party whose USP was to be somewhat different from established political parties, ones it opposed so viciously, and hobnob with their leaders in Rajasthan has raised questions in political circles.

In Punjab too, the AAP resisted temptation to get a popular face such as Navjot Singh Siddhu, who also enjoyed a clean image.

When asked whether Dr Vishwas was doing the right thing by joining hands with the “discarded” BJP and Congress leaders, former AAP convenor, Rajasthan, Ashok Jain saw nothing wrong in these meetings.

"These are only presumptions. No one has been inducted in the party as yet. These meetings are regarding launching of a joint agitation," he said, adding that the party was never averse to leaders with a clean image from other political parties.