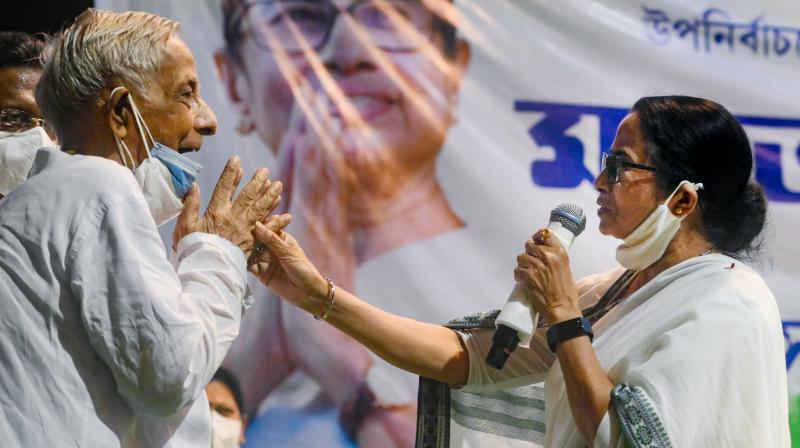 Kolkata: Trinamul Congress supremo Mamata Banerjee on Wednesday accused Prime Minister Narendra Modi and Union home minister Amit Shah of renewing their pressure tactics to intimidate her party leaders through the investigative agencies while she is busy fighting the Bhowanipore Assembly bypoll to become an MLA and continue as West Bengal chief minister.

Kickstarting her campaign in Bhowanipore, Ms Banerjee said at a TMC workers’ meeting that the Enforcement Directorate (ED) had summoned her MP nephew Abhishek Banerjee to New Delhi again for questioning in the coal smuggling scam while the CBI also called her Cabinet colleague, Partha Chatterjee, for grilling in the chit fund scam.

She also pointed out two other Cabinet colleagues -- Firhad Hakim and Subrata Mukherjee – who, along with party MLA Madan Mitra, were sent summons through the Assembly for a court appearance in the Narada sting operation case after the ED chargesheeted them recently.

Wondering about the purpose behind the second ED notice to Mr Banerjee, the TMC supremo dared the ED to question him in Kolkata.

“The BJP cannot fight me politically. It silenced the Congress by intimidation through agencies. The same thing had happened to Sharad Pawar and Mulayam Singh Yadav. What the BJP is doing here is to harm me. As soon as the election was declared, the agencies also started dancing. But I do not blame its officers because they admit the pressure on them. Who is putting the pressure on them? It is Narendra Modi and Amit Shah. They are doing whatever they wish,” the CM alleged.

She then added: “With the declaration of the polls, Abhishek and Partha. Before them was the turn of Subrata and Bobby (the nickname of Firhad Hakim). If there is any case against Abhishek, it can be pursued legally. I have no problem. But when there is neither any case nor any evidence, why would you have to prove yourself a thief?”

The CM went on to argue: “If there is no intention, how can Abhishek be summoned to Delhi again after questioning for nine hours? Why was the case shifted to Delhi from Kolkata? What is the secret political motive behind this? If the ED has the guts, it can send summons to its Kolkata office. Our party leaders will appear there. In the Narada case, the names of Subrata and Bobby are there. But the name of the real culprit … who was caught taking the money … is not there."

Referring to Mr Shah, Ms Banerjee added: “There is a second man who is giving instructions to the agencies for making arrests and using Pegasus. on others.”