Kalyan Singh’s exit from Rajasthan’s Raj Bhavan could lead to the charges against him being reinstated. 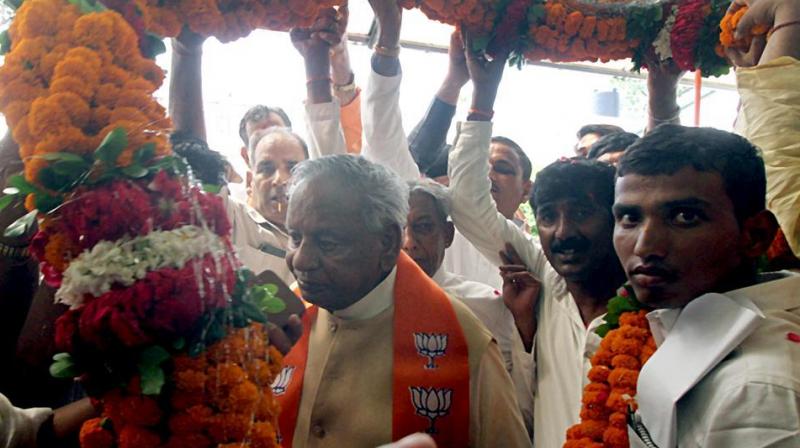 Singh was inducted in the presence of UP BJP chief Swatantra Dev Singh here. (Photo: ANI)

Singh who was earlier in BJP has rejoined the party after completing his term as the Governor of Rajasthan.

Singh was inducted in the presence of UP BJP chief Swatantra Dev Singh here.

The return of the 87-year-old politician to Uttar Pradesh’s politics comes at a time the Ayodhya land title dispute in the Supreme Court is in its last lap.

A five-judge bench of the top court has been holding daily hearings to decide the Ayodhya’s Ram Janmabhoomi-Babri Masjid land dispute.

A verdict in the emotive and politically sensitive case is expected before Chief Justice of India Ranjan Gogoi’s term ends in November.

Kalyan Singh, who has twice been chief minister of Uttar Pradesh, has been the backward face of the BJP, which he has left twice following differences with the party leadership, reported Hindustan Times.

Despite his advancing age, Kalyan Singh, a Lodh (OBC), whose son Rajveer is a Lok Sabha MP and grandson Sandeep, a minister in Yogi Adityanath government, is still considered to be key backward leader whose name is still respected within his community, a BJP leader said.

But it has been his association with the temple movement that helped raise his stature within his party and outside.

Kalyan Singh was the Uttar Pradesh chief minister when Babri mosque was pulled down on 6 December 1992. His government, along with three other BJP governments, was subsequently dismissed.

Kalyan Singh was named as one of the accused in the Babri demolition conspiracy case that was investigated by the Central Bureau of Investigation.

When the case was revived in April 2017 on the Supreme Court’s orders, he was left out due to the constitutional immunity for governors from standing trial.

Kalyan Singh’s exit from Rajasthan’s Raj Bhavan could lead to the charges against him being reinstated.

His aides, however, said that it does not bother the ageing stalwart or the BJP much.

“He has always been a Ram bhakt. He did willingly go to jail on the issue, remember? Even as governor he advocated the temple cause. So losing his immunity and being named for criminal conspiracy would not bother him or any of us,” Hindustan Times quoted Kumar Lodhi, a die-hard supporter of Kalyan Singh.

The 87-year-old leader's tenure as Rajasthan governor ended on September 3.
Singh, a prominent BJP leader, was appointed as the Governor of Rajasthan in 2014.