Funds given to Odisha govt siphoned off, says Amit Shah

Reacting to Shah’s remarks, Patnaik said the BJP president’s observations will have no impacts on people of Odisha. 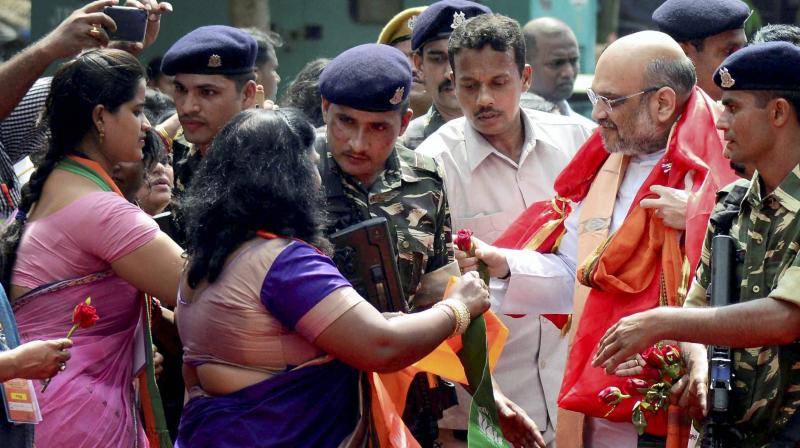 Bhubaneswar: BJP president Amit Shah on Friday appeared quite aggressive against the Naveen Patnaik government in Odisha as he equated it with a “burnt” and “defunct” electric transformer “unable to transfer the volume of power transmitted by the Union government to the state”.

Not only this, he also dubbed the state government as a “nikkama” or non-performer.

Addressing a large crowd of booth-level workers here at Janata Maidan, Mr Shah said although the Union government had given nearly Rs 4 lakh crore to the state under different development schemes and programmes, people could not get expected benefits as sizeable portions of the funds were siphoned off and or misutilised.

“Under the 13th and 14 Finance Commissions, the Modi government has given Rs 1.32 lakh crore. Similarly, in other schemes, it has given Rs 2.60 lakh crore. Let the Mr Patnaik furnish details about how and where it has spent the money,” he said.

The BJP supremo complained about lethargy in the state administration and said Central programmes and schemes meant for poor and backward class could not be executed to satisfactory level, more because of the “inability” of the political rulers here.

“This BJD government has turned to be a complete burnt and defunct transformer. It is unable to transmit the good governance practices of the Union government to the people living at the grassroots.

“It needs to be removed and thrown into the sea,” Mr Shah said.

Reacting to Mr Shah’s remarks, Mr Patnaik said the BJP president’s observations will have no impacts on people of Odisha.

“I don’t see any impact of Shah’s remarks on people of Odisha,” Mr Patnaik said.

BJD spokespersons Pratap Keshari Dev, Sanjaya Das Burma and Arun Kumar Sahoo launched counter offensive against the BJP supremo saying the latter had crossed all limits of civility while carrying out his political propaganda in Odisha.

“Has anybody heard of Odisha chief minister Naveen Patnaik bad-mouthing his political opponents? Has he ever used uncivilized words against his rivals? However, the words and languages the BJP president uses to belittle Naveen are very unsavoury and unbecoming of a person of his stature,” the BJD spokesperson said.