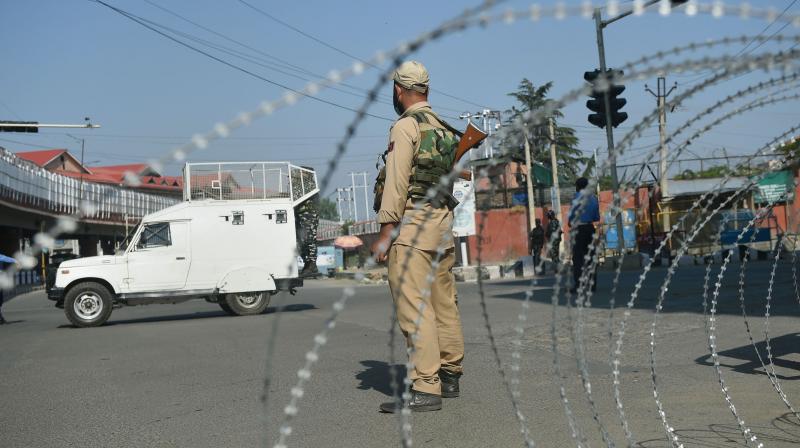 Srinagar: Jammu and Kashmir Chief Secretary BVR Subrahmanyam’s remarks that its political leaders were “corrupt” and, therefore, not a “single soul had cried” over their detention in August last year has drawn flak from various political parties of the erstwhile state.

They have accused him of contravening service rules and breaching propriety.

The CS had on Friday while speaking to a group of visiting media persons here said, “J&K was a broken state and there was no system in place due to years of mis-governance, corruption and unbelievable levels of fraud committed by leaders of mainstream parties and separatist organizations.”

He had added that, therefore, “not a single soul had cried” over their detention on August 5 last year when the state was stripped of its special status and split up into two Union Territories.

He claimed that J&K was “a big ponzi scheme,” when he was sent here in June 2018 and was asked by Prime Minister, Narendra Modi, ‘Go, clean up the administration, rebuild it and hand over the ‘amanat’ (precious possession) to the local people’.

Reacting sharply to his remarks, People’s Democratic Party (PDP) said that the CS has committed “gross abuse” of civil service rules and asked him “If no one sheds a tear for them why are the leaders jailed under PSA (Public Safety Act)?”. It termed Subrahmanyam’s remarks as “uncalled for and utterly flagitious”.

The PDP accused him of having come to J&K “with a colonial mindset and being the chief executioner of RSS” in the erstwhile state.

“It is ironic that he is finding fault with the entire population of J&K while running the most corrupt administration that the state has ever witnessed.

He is, in fact, heading a cabal of officers who are affiliated with RSS and are enforcing their agenda in Kashmir. IAS has never stooped to this low”.

The PDP alleged, “His only fame to glory is establishing a culture of impunity, polarised administration, systematic sidelining of local officers, fragmenting of bureaucracy on feudal lines and perpetuating the quid pro quo culture of rewarding incompetence. This is the part of the RSS campaign to destroy the identity of Kashmir and they are now attributing criminal charges on almost everybody in Kashmir in the name of terrorism, separatism and corruption”.

CPIM’s Mohammad Yousuf Tarigami said the CS’s remarks were totally unacceptable. He said, “We want to ask him what his administration has done to eradicate corruption in J&K for the last more than two years when there is no elected government in the state. Leveling baseless allegations against politicians without any credible evidence is fraught with serious consequences”.

Tarigami said, “Bureaucrats come and go and it is not the mandate of a CS to level baseless allegations against elected representatives of the people.” He said that if frauds have been committed by some persons who have remained in authority, “what stops the administration from making those public and booking the offenders?”

The CPIM leader said that there was a wide perception among common people in J&K that the administration has become more corrupt after the abrogation of Article 370 and BJP government’s claim to give J&K a corruption-free administration and governance was simply rhetoric and has proved merely a hoax.

“The CS needs to give some attention to this aspect instead of leveling unfounded allegations against the elected representatives”.

Jammu and Kashmir Apni Party (JKAP) said that Subrahmanyam’s statement tantamount to breach of service rules and is legally and ethically unwarranted.  “All the government employees including bureaucrats are supposed to remain apolitical and give people a fair deal of governance which is entirely lacking in J&K,” said JKAP leader and former minister Ghulam Hassan Mir.

He said, “An officer of the rank of Chief Secretary seems to have forgotten about service conduct rules which warrant serving officers not to talk about issues pertaining to politics and instead should work for strengthening the institutions of governance on the ground”.