Congress has alleged that BJP is behind the resignations of the MLAs accusing the BJP of poaching. 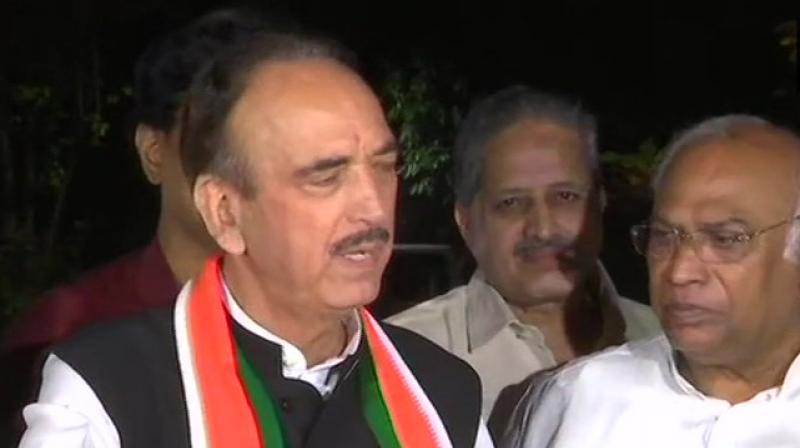 Yesterday, the Karnataka state cabinet resigned in paving way for the rebel legislators to be appointed and facilitating the reformation of the cabinet. (Photo: ANI)

Bengaluru: Senior Congress leaders met in Bengaluru on Tuesday to review the political scenario in the state as the fate of state government is uncertain after 11 legislators have resigned citing displeasure with the party and the coalition.

The Congress has alleged that the Bharatiya Janata Party is behind the resignations of the MLAs accusing the BJP of horse-trading, a charge the BJP has denied.

After the meeting, Azad said, "The entire country is anguished at the way the President at the national level and Governor at the state level are conducting themselves and the way democracy is being finished in this country."

Accusing the BJP of using state machinery to topple governments, Azad said, "State after state, opposition governments are being toppled and the centre is using Governors for this. From Arunachal Pradesh to Karnataka, Governors side with defectors and help them in coming out of the Congress. We appeal to the nation to rise to the occasion to save this democracy."

Karnataka Congress leader Zameer Ahmad said, “BJP has kidnapped our MLAs and is keeping them at gunpoint. Their mobile phones have been seized. They are not even allowed to talk to their family members. If set free, the MLAs will return to us. 4-5 people each are keeping a watch on them.”

In BJP's defense, senior BJP leader and Defence Minister Rajnath Singh said in the Rajya Sabha,“Our party has nothing to do with what is happening in Karnataka. Our party has never indulged in horse-trading.”

He further said, “Whatever is happening in Karnataka is the internal matter of the Congress. Congress is not able to handle the situation.”

Karnataka Congress leader Zameer Ahmad said, “BJP has kidnapped our MLAs and is keeping them at gunpoint. Their mobile phones have been seized. They are not even allowed to talk to their family members. If set free, the MLAs will return to us. Our people each are keeping a watch on them.”

News Agency ANI quoted BJP legislator Arvind Limbavali, “Yesterday, we decided to protest at district headquarters for the immediate resignation of CM. Today, we have decided that all BJP MLAs will protest in front of Vidhan Soudha at 11:30 a.m. tomorrow.”

He further said, “A high-level BJP delegation is going to meet Governor of Karnataka at 1 p.m. We want the immediate intervention of the Governor. We will decide further course of action after tomorrow's meetings with Governor and Speaker.”

The Congress, on Tuesday, protested in the Parliament accusing the BJP of “poaching” its MLAs in Karnataka. The attack was led by the party’s leader in the Lok Sabha Adhir Ranjan Chowdhury. Congress MPs raised the slogans asking the BJP to “stop the politics of dictatorship” and “stop the politics of poaching”. Former Congress president also joined them in raising the slogans.

In a major relief to the Congress-JD(S) coalition, the state Assembly Speaker Ramesh Kumar has termed eight of the resignations of the rebel MLAs as “illegal” and has asked legislators to present their cases before him. Kumar has written to the Governor stating his position.

Siddaramaiah had requested the rebel MLAs to join the party back else they might face disciplinary action. He said the ground on which the MLAs had resigned were unconvincing.

The JD(S) has reportedly accommodated its MLAs at Prestige Golfshire Club in Bengaluru fearing more resignations.

On Monday, it was reported that JD(S) leadership had booked 10 villas, 15 deluxe, and 10 cottages at Paddington resort located in Madikeri about 250 km from Bengaluru for three days.

Yesterday, the Karnataka state cabinet resigned in paving way for the rebel legislators to be appointed and facilitating the reformation of the cabinet.

Also, the rebel Congress MLAs, who had gone to Satara from Mumbai, have returned to the financial capital.