Rahul started the trend of resignations in Cong, says Rajnath. 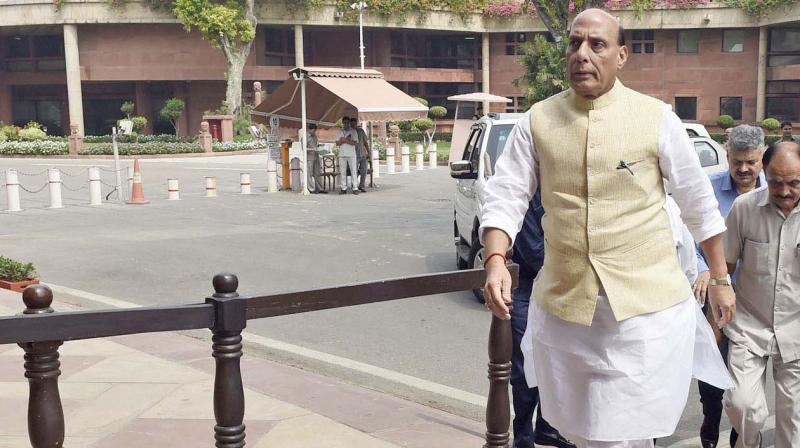 New Delhi: Defence minister Rajnath Singh on Monday turned the heat on Congress over defection of its MLAs in Karnataka, saying it is party president Rahul Gandhi who had started the process of resignations and his partymen are simply following him.

The Congress and JDS have accused the BJP of poaching on their MLAs to bring down the alliance government in Karnataka.

“For whatever is happening in Karnataka, our party is not responsible. We have a history of never having pressurised any other party’s parliamentarian or MLA, either through greed or pressure, to defect. We are fully committed to upholding the prestige of the Parlia-mentary form of democracy. On these allegation made by Congress and TMC leaders I want to say that we have not started all this but the process of resignations has been started. He himself resi-gned and asked other leaders to resign...,” Mr Singh said while the Congress members stood up in protest for taking the name of Mr Gandhi.

Mr Singh’s response came after Congress accused the BJP of trying to break the party in Karnataka and poaching its MLAs. Raising the issue during the Zero Hour in Lok Sabha, Congress leader in the House Adhir Ranjan Choudhury accused the BJP-led government of  “stealing” its lawmakers in Karnataka.

“They say they believe in democracy. But they are making mockery of democracy. There is an attempt to break the Congress. A dal badlu (switching party) conspiracy. Our MLAs are poached to Mumbai, there is a pre-determined, well-calculated design. The moment they (MLAs) come out of the Governor’s House, they have a car, a hotel and even a flight ready for them You say you have 303 MPs, yet you are not satisfied!,” said Mr Choudhury.

Giving an example to the present situation he said: “Suppose I have 10 gold and 10 silver coins in my house but I am not able to guard them properly. Does this mean that a thief can come and steal away these gold and silver coins? They say they believe in democracy but they are making mockery of democracy.”